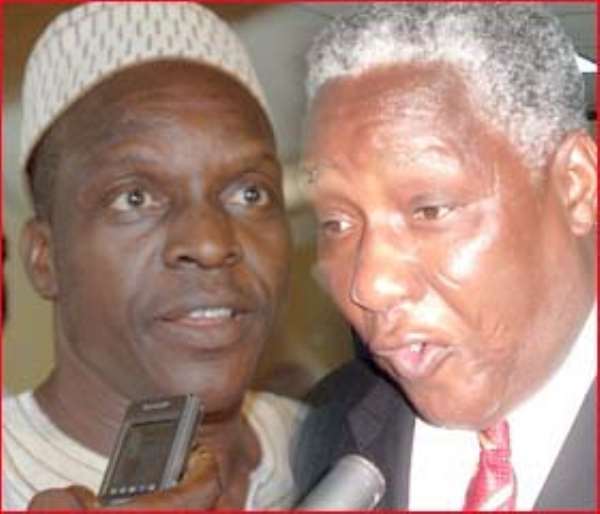 The Monday evening ministerial reshuffle by President John Evans Atta Mills has been greeted with criticisms, with the Number One Citizen receiving tongue-lashing from groups and individuals for exercising his discretionary powers.

President Mills has come under a barrage of attacks for what critics described as his act of 'indiscretion' in some of the appointments, with National Democratic Congress (NDC) MPs intending to match to the Castle to protest against the 'poaching' of their leaders.

According to the aggrieved MPs, the President erred by not informing them of his decision to nominate the three Majority front-liners for ministerial positions.

Constituents of some of the casualties are also up in arms against the President for dropping their 'idols'.

Residents of Bongo in the Upper East region nearly took to the streets yesterday in protest over the removal of Albert Abongo as Minister of Water Resources, Works and Housing, before the police and chiefs in the area went on their knees begging for restraint.

However, three experienced legislators and leaders of the Majority side in Parliament who have been nominated for the ministerial portfolios by President Mills in his maiden cabinet reshuffle, say they are prepared to face new challenges in government for the development of the country.

Alban S.K. Bagbin, Majority Leader in Parliament; John Akologu Tia, Deputy Majority Leader and Enoch Teye (E.T.) Mensah, Majority Chief Whip, have been picked from Parliament to serve in the executive arm of government, a situation which is seen by some political analysts as a weakening of the legislature.

Bagbin is taking over from Albert Abongo as the new Minister for Water Resources, Works and Housing; John Tia, a trained journalist, will be occupying the hot seat as Minister of Information, whilst E. T. Mensah replaces Stephen Amoanor Kwao as Minister for Employment and Social Welfare.

The Majority Leader and his deputy are both pioneers in the Fourth Republican Parliament, representing their respective constituencies, Nadowli West and Talensi for 17 years now (since 1993), whilst E. T. Mensah has represented the people of Ningo/Prampram for 13 years.

Commenting on the nomination of the three leaders, Frederick Opare-Ansah, Minority Chief Whip, expressed worry over the removal of these front-liners, saying it could have negative impact on the business of the House, especially if the new leaders taking over from them are belligerent and cannot build consensus with the Minority side.

Other legislators have also bemoaned the reassignment of MPs on the front bench on the Majority side.

New Patriotic Party (NPP) MP for Bimbilla, Dominic Nitiwul, who described Mr. Bagbin as a “heavyweight” in parliamentary affairs, said he is yet to come to terms with what informed the President's decision to move the Majority Leader to the Works, Housing and Water Resources ministry.

“They are the most experienced Members of Parliament that you can have at any given point in time,” he told Asempa Fm, hoping that nomination of the three heavyweights is not a deliberate ploy to weaken Parliament as an institution.

He is unhappy that most of the MPs were not consulted before the changes to their leadership were made, adding, “Just consult us so that at least, we'll be in the know. We just don't wake up and the following day we know we are coming to meet a new leader,” he indicated.

But another NDC MP disagrees. Dominic Azumah, MP for Garu Timpani believes the appointments will not create any vacuum in Parliament.

He said the current leadership of the House has shown that they are capable of handling affairs.

Another controversial nomination which is generating a lot of debate, is that of Akua Sena Dansua as Youth and Sports Minister, replacing Abdul-Rashid Pelpuo who is said to be with the Black Stars team in far away Angola at the time of the announcement.

The NDC MP has occupied that position for just six months and is in Angola with the national soccer team, the Black Stars for the African Cup of Nations.

Isaac Asiamah, MP for Atwima-Mponua, who spoke in Parliament yesterday on the issue, lamented that Mr. Pelpuo's removal is out of place, stressing that the out-going Sports Minister “was doing very well and liked by all”.

Speaking in separate interviews, Alban Bagbin, E.T. Mensah and John Tia stressed that their movement from the front row in Parliament will not weaken the House but will rather give the opportunity to others to takeover the mantle of leadership in the Legislature.

According to the outgoing Majority Leader, Bagbin, there are “capable men and women from the Majority side who can take over the mantle of leadership”, and work for the business of the House to move on.

Asked whether his nomination is a way of gagging him so he would not criticize the government, the Nadowli West MP said he never criticized the Mills Administration but often raised concerns about lack of coordination and effective communication among MPs, members of the executive and party supporters, which are important for proper functioning of government.

“I will continue to be assertive and speak my mind on issues of national interest within government”, Bagbin told DAILY GUIDE.

Moving to the hot Ministry of Information, Deputy Majority Leader John Tia said he is going to work with competent deputy ministers, adding that he does not envisage any insurmountable problems.

“If you want to carry the load alone, that is where you have problems,” the Information Minister-designate pointed out.

On his part, Majority Chief Whip, E.T. Mensah, who is admired and liked by MPs from both sides of the House for fighting for the welfare of members, said his vision for the Ministry of Employment and Social Welfare “is the vision of NDC manifesto for a 'Better Ghana' to move the country forward in the right direction”.