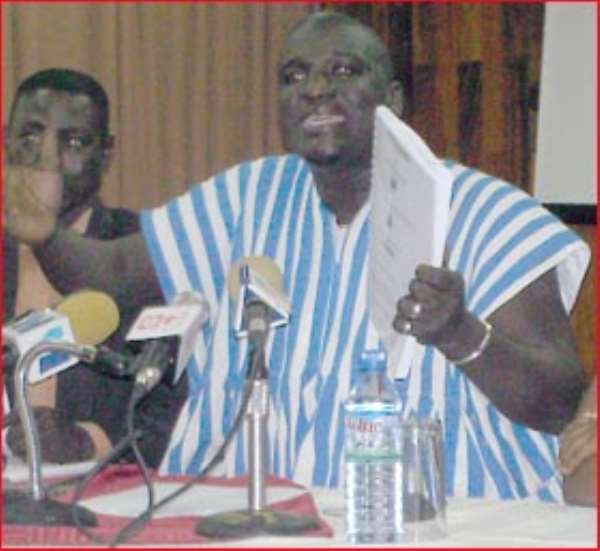 A pro-democracy grouping, Alliance For Accountable Governance (AFAG), has added its voice to the raging Kosmos/EO versus government imbroglio.

The body language of AFAG bespoke of its preparedness to battle the unfolding developments in the country's oil discovery and the attendant complications.

At a press conference yesterday, the grouping described the brouhaha as a political persecution that had far-reaching implications for the country's business image.

In a statement read on behalf of other members, Anthony Karbo bemoaned what he described as the persecution of Ghanaian businessmen, especially local shareholders of Kosmos Energy, the company that discovered oil in commercial quantities.

AFAG described the unfolding development as shocking as it recalled the raiding of the office and residence of George Owusu by the Police and the traveling of the Attorney-General to the US to terminate the appointment of the aforementioned gentleman, noting that these were ominous signs.

AFAG noted that “various charges against the EO group, including the failure to call an annual general meeting in 2003, failure to circulate profit/loss account, balance sheet and reports of the company, establishment of a business contrary to the Investment Promotion Act and forgery of the signature of a partner, among others are all politically motivated to dent the image of George Owusu and Dr. Bawuah Edusei and to devalue the shares of Kosmos”.

AFAG pointed out that previous efforts to discover oil in the country were unsuccessful, but the perseverance and dedication of the EO Group led to the discovery of oil in commercial quantities at the Jubilee Oil Fields.

“Indeed but for the perseverance and dedication of the EO group after being rejected by 12 oil companies in USA, Ghana wouldn't have found the Jubilee Oil fields,” AFAG stated.

Continuing with the genesis of the oil discovery, AFAG explained that as far back as 2002, major oil companies considered investment in Ghana “as high risk and a graveyard”.

With the support of the Greater Houston Partnership, a Houston-based business group, the EO Group organized a conference to discuss Ghana's offshore hydrocarbon potential.

The Chinese and others, AFAG observed, turned their attention away from Ghana, adding that it was ironical that today, the former would be in a position to buy the shares of Kosmos Energy at $4 billion.

“It was the initiatives of EO Group and its interaction with the energy giant that changed the story,” AFAG opined.

Debunking the charge of causing financial loss to the state, AFAG explained that “the EO Group and Kosmos Energy on the sidelines entered into a private agreement and EO was entitled to 3.5 percent working interest.

“The 3.5 percent is a private arrangement with Kosmos Energy and not the Ghana Government. Furthermore, the group's share of 3.5 percent is not deductible from the government of Ghana's share but Kosmos'.”

This, AFAG maintained, cannot be said to be causing financial loss to the state, stressing that “this deal of 90 percent to the exploring private firm and 10 percent to state was introduced by Tsatsu Tsikata, who was then the boss of the Ghana National Petroleum Corporation (GNPC) to bring foreign experts to explore at their own cost.

“If the AG's department has any questions arising out of the deal that has been ratified by Parliament, then the most appropriate forum to seek redress is the Supreme Court,” it revealed.

AFAG noted that the EO Group has been exonerated by Anadarko, the main oil rig operator in the Jubilee field, given a preliminary investigation in accordance with the Foreign Corrupt Practices (FCP) Act, from any possible fraudulent dealings.

The grouping has served notice of its preparedness to organize lectures and other activities as part of its advocacy agenda.

The government of Ghana is currently embroiled in a legal tussle with Kosmos Energy and the EO Group, the local partners that brought in the oil giant which eventually struck the black gold in commercial quantities.