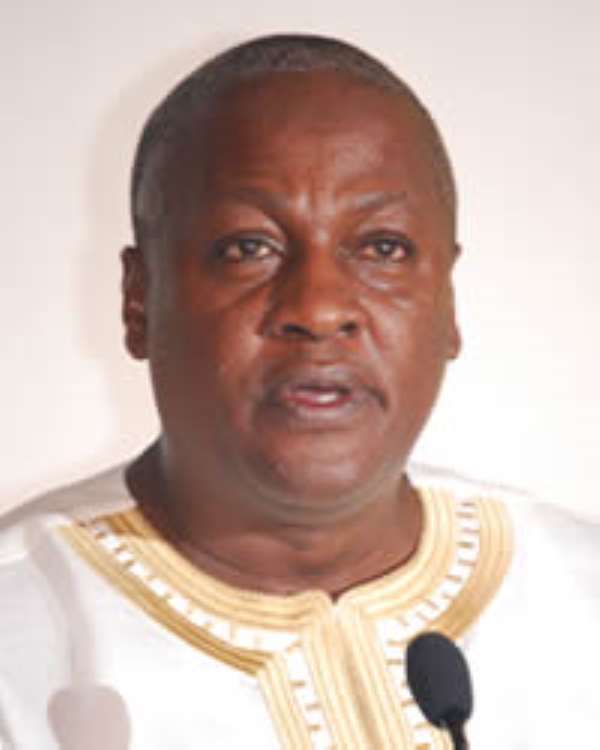 
Vice President John Dramani Mahama has appealed to kingmakers of the Gonja Traditional Council not to import any foreign convention to adulterate their traditions on succession that would jeopardize the enskinment of their next king.

He said Ghanaians have confidence in the succession of kingship in Gonjaland. The vice president stressed the need to choose a worthy successor to the king to ensure that the process was peaceful and devoid of acrimony to serve as a good legacy in honour of the late king.

Vice President Mahama made the appeal in Damongo on Friday when he led a government delegation to the funeral of the Yagbonwura Bawa Doshie I, Overlord of Gonja, who died on January 1, this year after a protracted illness.

Former President John Agyekum Kufuor, accompanied by some former ministers under his regime, were among the dignitaries who paid their last respect to the late Yagbonwura who many described as a unifier and a peacemaker.

Other dignitaries included some ministers, Members of Parliament (MPs), District Chief Executives and a representative of Asantehene. They were greeted with a display of rich Gonja culture and tradition.

Vice President Mahama said: "As a son of Gonjaland, I plead that the honour we can give to our late king is to ensure that his succession is peaceful and devoid of acrimony," and that there should be no interference in the enskinment process.

He appealed to the Committee of Eminent Chiefs appointed by former President John Agyekum Kufuor to mediate in the Dagbon crisis not to allow the death of Yagbonwura to affect their work in finding lasting peace for Dagbon.

He said it was necessary to allow those given with the authority to choose a worthy successor based on tradition, customs and usages of Gonja and allow who ever is chosen be a worthy successor to fill the vacuum created as a result of the king's death.

On the creation of a new region out of the Northern Region, for which the late king was a strong advocate, Vice President Mahama said government was in the process of setting up a committee of enquiry to do the necessary due diligence on justification to split the region into two.

He said if the committee recommends a split, the government would act on it and a referendum would be decided and if 80 per cent vote in favour, the splitting of the region would be done.

He announced that the Africa Development Bank (AfDB) has accepted to fund the construction of the Fufulso-Damongo-Sawla road, which apart from its socio-economic benefits to the people, would be a tribute to the late king. The vice president also hinted that the Japanese government was also providing funds to expand the Damongo water treatment plant.

Mr.Kufuor described the late king as a unifier, peace-maker and looked beyond his traditional boundaries in search of peace.

According to Mr. Kufuor, every meeting between the two of them was an occasion for the king to surprise him with his depth of wisdom.

He said the late king lived a life worthy of emulation and appealed to the people of Gonjaland to choose a worthy successor to continue from where the late king left of.

The Yagbonwura Bawa Doshie I, who died on January 1, this year, left behind three widows, 25 children and 66 grand children.