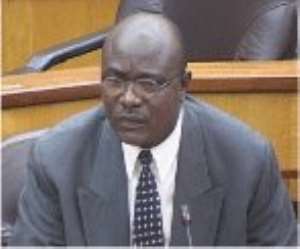 Reacting to a lead story in yesterday's issue of the Daily Guide, captioned “MP Attacks Kufuor”, Hon. Adjaho explained that what he did was to criticise the President's inaugural address to the district assemblies.

“I have extreme respect for the office of the President, and if you'll notice, I always precede statements on the floor of the House with 'His Excellency”.

According to Adjaho, what he did at Akatsi after the inauguration of the assembly was to take issue with the President's address.

Speaking to the Ghana News Agency (GNA) last Tuesday, Mr. Adjaho noted that the President's inaugural address in which he called for the introduction of partisanship in the local council elections was misdirected.

“The appropriate forum is Parliament, through a Bill or its inclusion in the President's Sessional Address”.

He held strongly that the country is not practising a Federal system where powers will be delegated to the lower structures of democratisation.

“It seems the non-party elections constitute a huge exercise in self-deception, as it appears the political parties sponsored candidates unofficially, and I believe it is time it is made official.”

In a statement to the Daily Guide, Mr. Bediako said what Adjaho said was not only misguided, but also hypocritical. Read his comments: “Even though in principle district elections are to be non-partisan, in practice this is not the case, and Mr. Adjaho is very much aware of this since we know of certain candidates who were supported by the NDC in preference to others who were classified as belonging to other political camps.

“We are very much aware, for example, of the evaluation of performance conducted by certain political parties in relation to the recent district elections, an indication that parties had special interest in candidates of their choice.

“It is in the light of this that we need to take a second look at the elections as they are now and make it partisan. There is, therefore, nothing wrong in making the district elections partisan.

“Hon. Adjaho's claim that the district assemblies were not the appropriate fora to direct the issue is also untenable. This is because the President has the right to inform the assemblies or Ghanaians about his concerns in relation to the issue before taking appropriate steps through a Bill to Parliament.

“Hon. Adjaho's confrontation is unnecessary and reflects a desire on the part of certain political figures to attack the government on any move it takes to address issues in the country.

“The HIPC initiative by President Kufuor, for example, was opposed by certain political figures, but the same people have asked for more of the relief from HIPC for their areas, questioning the basis for the distribution of the relief.

“Government will, however, remain focused in its desire to address the problems facing the country”.