US diverts 4000 Troops to Haiti 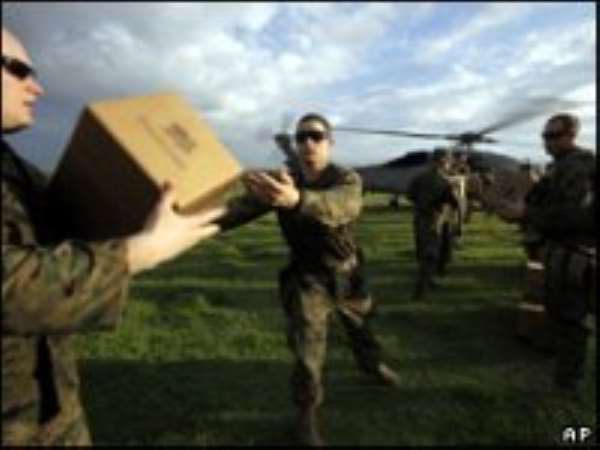 The US is sending another 4,000 sailors and marines to Haiti for the earthquake relief effort, diverting them from deployments in the Gulf and Africa. The 24th Marine Expeditionary Unit and USS Nassau Amphibious Ready Group would "significantly" increase the ability to quickly provide aid, the navy said.

The move will increase the number of US troops involved to about 16,000.

Earlier, a strong aftershock rocked the capital, Port-au-Prince, but did not seem to cause further casualties there.

Away from the city, survivors in some towns are still waiting for help after the original 7.0-magnitude earthquake struck eight days ago.

The BBC's Mark Doyle, who visited the village of Leogane near the epicentre, said the only outside medical help it had seen was a team of Dominican and Spanish doctors who were setting up a treatment centre.

He said the village had been left looking worse than most war zones - as if it had been carpet-bombed, then pounded with a relentless artillery barrage.

Haitian officials say the death toll from the quake was likely to be between 100,000 and 200,000, and that 75,000 bodies had already been buried in mass graves. An estimated 1.5 million are homeless.

People are still being found alive in the rubble, including a five-year-old boy reportedly pulled from the ruins of his home by his uncle. Earlier a 10-year-old girl and her eight-year-old brother were found.

More than 120 people altogether have been rescued by international teams.

On Wednesday afternoon, the US Second Fleet announced that the three-ship USS Nassau Amphibious Ready Group (ARG), which left port in Virginia on Monday for its regular deployment, had been told to go to Haiti instead.

The group will pick up the 24th Marine Expeditionary Unit (MEU) from North Carolina en route, making up a force of 2,000 sailors and 2,000 marines.

Adm Mike Mullen, the chairman of the US Joint Chiefs of Staff, made the decision to divert the troops "based on continuing urgent needs in the Haiti relief effort".

"The ARG/MEU will provide an array of helicopter and amphibious landing craft assets, significantly increasing the ability to quickly provide relief supplies where they are most needed," the Second Fleet said in statement.

"In addition, the marines assigned to 24 MEU will be able to provide an additional force capable of providing a secure environment for the ongoing relief efforts ashore in Haiti."

The first group of 2,000 marines on board vessels off Haiti's coast went ashore on Tuesday to assist the relief effort. They have since landed heavy equipment, such as bulldozers, diggers and trucks, and other supplies near the epicentre of last week's earthquake.

The decision to redeploy assets by the US military came after it defended its handling of the rescue operation. Survivors and aid groups have complained of long delays in getting vital supplies of food, water and medicine.

Medicins Sans Frontieres (Doctors Without Borders) said its cargo plane with 12 tonnes of medical supplies had been turned away from the congested Port-au-Prince airport three times since Sunday. It said five patients died from lack of the supplies it carried.

"We were forced to buy a saw in the market to continue amputations," the group's Loris de Filippi told the Reuters news agency in Cite Soleil.

Gen Douglas Fraser, head of US Southern Command, insisted US forces were "doing everything in our power to speed aid to Haiti as fast as humanly possible".

He said they planned to start using two other airports, at Jacmel in Haiti and San Isidro in the neighbouring Dominican Republic.

Help came "very fast," Rene Preval said. "When it arrives, the question is: where are the trucks to transport it, where are the depots?"