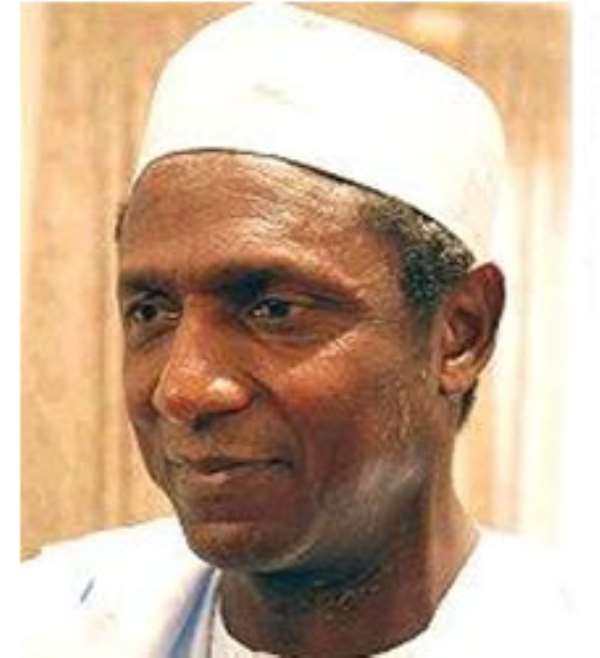 A Pidgin Treatise On The Black Man's Affairs
What do you make of the fracas going on several territorial blocks down the Atlantic coast from our own shores? A self-professed patriot circulated an SMS message around the world from Lagos during the week:

If you see His Excellency President Umaru Yar' Adua of Nigeria anywhere, please hold onto him and call Nigeria immediately. We shall come and take custody of him.

If he resists, please do not employ force. Plead with him…beg him..: Tell him we love him so much that without him, the whole land mass of our country from Port Harcourt to Sokoto, from Onitsha to Maiduguri, will tumble into the Atlantic and sink down to the ocean bed.

Tell him we are sorry for all the wrongs we Nigerians have done him and assure him that we shall never, ever criticise him or his government again. Never! We shall withdraw all demands various political interest groups have been making on his administration.

We shall never make any reference to the state of his health again. Tell him that if on his return he still feels tired, we shall let him go home and sleep all his wants until he feels like working. There is Goodluck Jonathan, who with some fair amount of good luck, will do all the paper work and inaugurate projects on the President's behalf…

President Yar' Adua left Nigeria on November 23, 2009 for medical treatment for a heart condition, and Nigerians have since not heard from him. After 50 days of dead silence from the president, news reaching him this week about a scheduled protest march led to his speaking to Nigeria and the world through the BBC on Monday.

Funny people, presidents. No one knows what makes them tick, sometimes not even their closest aides. One thing is certain: What they say and do have such a profound effect on the morale and spirit of the nation and it makes little difference whether the nation is called Ghana or Nigeria.

In typical response to what he considers balderdash, the guy from Lagos will usually retort. “Na crap that, Oga.” Like his predecessor Mr J.A. Kufuor, President Mills came into office with a loud war cry against corruption. His own austere and modest lifestyle lent credence to the sincerity of his pledge.

Mills' staunch defence of his former Minister of Youth and Sports Mubarak Muntaka when he met journalists at the presidency recently was therefore a most depressing letdown. As our American friend Joe Maynard would have put it, 'the man's comments got me all shook up.”

Muntaka resigned his portfolio in the wake of multiple allegations of official impropriety. No evidence was produced by the alleged paying officers to confirm allegations that he had received illegal payments from the treasury of his ministry. Good defence there in favour of Muntaka, but not so fast..!

It was established that he took a young woman working with the public service to a foreign diplomatic mission, dishonestly obtained a visa for her and flew her at state expense to Germany where they stayed in a hotel for the express purpose of engaging in watamcalit, all at our expense.

It was also established that he charged purchases of infant foods and baby-sitting items for his household to the public purse. Widespread condemnation of the revelations causes the man to resign.

Enter President Mills chanting Muntaka's praises for voluntarily resigning his portfolio. Tell me, how many ministers of state have ever done that, Mills' challenges his political opponents.

How many ministers have not flown abroad with a busty bimbo in secret tow for steamy nights in the fairy tale ambience of hotels abroad, huh? That was the president again. The man merely acted with indiscretion, Mills argues.

It all sounded so unlike Professor Mills. The president's comments on Muntaka have certainly badly shaken the confidence of many people who have such hopes in the potential of Mills' leadership!

Anyhow, I was commenting on President Yar'Adua wasn't I? In the past few weeks, there have been at least three separate court actions seeking to compel the Federal Executive Council (FEC) of Nigeria to officially establish if President Yar'Adua's absence from office for more than 42days was not a result of his incapacitation.

The opposition has insisted that Yar'Adua and his government should have taken the very simple step of informing the legislature of the true state of the president's health and handing over power to Vice-President Goodluck Jonathan.

The Punch editorial of Tuesday was a very angry one which argued that instead of doing the right thing in accordance with the provisions of the constitution, “a ruthless cabal has been allowed to take undue advantage of a power vacuum.”

It has, however, been argued by others that the constitutional provision requiring the transfer of power from an ailing president to the vice-president is only discretionary in its wording, and not at all mandatory.

President Mills assured us that the proposed review was not intended to benefit only sections of the population but all the people. I like the concept of “the people.”

My worry is that the very people for whom the constitution is written and reviewed, do not have the foggiest idea what a constitutional review is all about.

Take a poll along the country's fish-landing beaches or the markets in our towns and cities: Wofa, auntie, have you ever head of the constitution? Decontitusen? Never heard of him. Who is he? What has he done?

What do you make of the negotiations between Ghana and Nigeria for an exchange of prisoners between the two countries? If it works out, I wonder what we Ghanaians shall be importing and what we shall be exporting.

I would stake a modest wager that we would be exporting a motley brigade of swindlers and armed robbers and importing a sizeable army of Ghanaian brigands well trained in the kind of activities exemplified by the terrible images Nollywood script writers pack movie screens with.

The Cabinda incident? How any football administrator could not have seen the crass stupidity in making the more than 60-year old separatist rebel enclave a venue for a continental football match, is a puzzle:

Thank God the missile the rebels first fired at the bus carrying the Togolese team missed its target. The bus would have been blown to kingdom come and the team along with the debris. Long live Africa nonetheless!