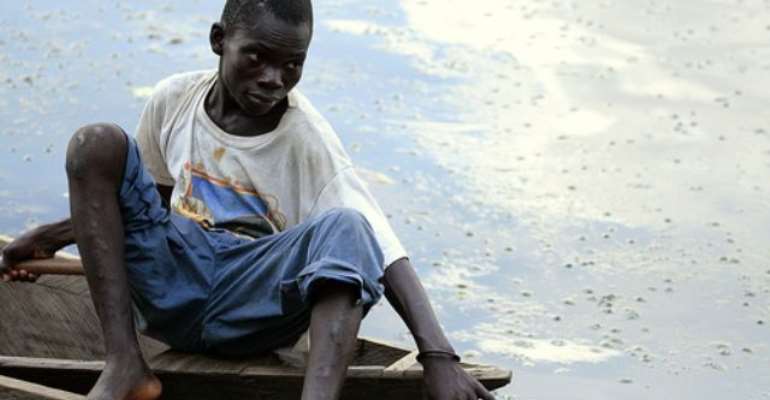 …Navy officers accused of extortion
STORY: FROM MICHAEL SARPONG MFUM, KETE-KRACHI
Discreet inquiries indicate that some navy officers detailed to regulate the smooth movement of boats on the Volta Lake from Kete-Krachi in the Volta region to Kejeji in the Brong Ahafo region extort huge sums of monies from boat operators.

The practice, TODAY's findings established, has led to an astronomical increase of overloading by boat operators as they fight to meet both operational and unforeseen costs, mainly due to pressures from some naval officers.

Not only do the boat operators take more than what they are required, majority of the people onboard are without life jackets which poses grave danger to their lives, the paper can state on authority.

A recent visit to the area by the paper revealed that navy officers at times barter the monies they collect with foodstuff when a boat operator is unable to pay the amount of money required.

1277064031_3259501bd7
However, some boat operators, who spoke to TODAY on conditions of anonymity, disclosed that the navy officers take between GH¢5 to GH¢10 from each boat operator before they are allowed to pass.

“The navy officers demand monies between GH¢5 to GH¢10 from us. So we are also compelled to overload our boats since you would be asked to pay whether you have overloaded or not,” one boat operator stressed, adding that they are also working for money like the navy officers.

“Sir, (referring to this reporter) navy officers take bribes from us and we also overload our boats. Here this is no news at all because this has gone on for a long time and nobody has come to deal with the problem.

We pay to them (navy officers) so they can allow us to overload our boats. So please it's a win-win situation, no loser in this case” a boat operator, who according to him, has been in the business for more than twenty years, told the paper.

Meanwhile, when TODAY sought for the comments of the District Chief Executive (DCE) of the area, Mr Moses Kwame Ponye, on the corrupt acts of the navy officers he expressed shock about the attitude of the officers and assured that the district would do everything possible to clamp down on officers who perpetuate these acts.

“The district will also collaborate with the Sene District Assembly to streamline the activities of boat operators to stop its recurrence,” Mr Ponye added.

Navy officers at Krachi-Kejeji are not the only culprits as their counterparts who man the Oti River from Dambai to the Krachi also indulge in this same act, TODAY's investigations further revealed.