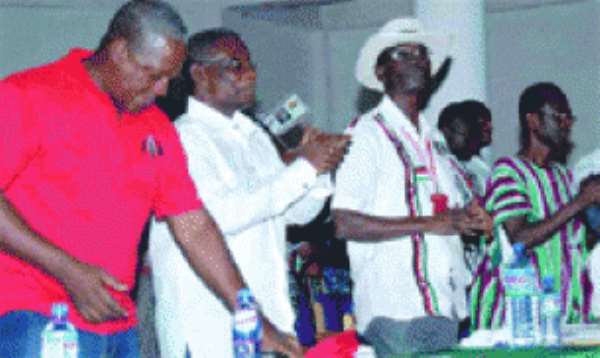 Delegates at the 8th National Delegates Congress of the National Democratic Congress (NDC) held in Tamale has endorsed amendments to the party’s constitution and voted overwhelmingly to retain Dr Kwabena Adjei and Mr Asiedu Nketiah as the Chairman and the General Secretary, respectively, of the party.

In the results which were declared by the Electoral Commission, amid jubilation and excitement, Dr Kwabena Adjei polled 1,749 votes, against 90 received by his only contender, Dr Asamoa-Tutu. Seven ballots were rejected.

Mr Asiedu Nketia, aka General Mosquito, obtained 1,739 ballots to beat his only contestant, Kweku Eshun, who had 116 votes, with three rejected ballots.

Dr Ekwow Spio-Garbrah had 972 votes, Alhaji Said Sinare received 731, while Mr Danny Annan obtained 679 to make up for the rest of the six vice-chairmanship slots.

The Spokesperson for former President Rawlings, Mr Kofi Adam, became the new Deputy General Secretary of the party when he obtained 1,094 votes to beat four other contenders.

For the position of Propaganda Secretary, Richard Quarshigah polled 1,270 votes to beat Bernard Allotey and Mustapha Kabila, who got 439 and 114, respectively.

The position of Treasurer went to Kamel Noshie, who had 1,501 votes to beat Yusif Adiss.

The congress also amended portions of the party’s constitution. The delegates voted in favour of some amendments, including the creation of a Party Leader position.

The position, voted for massively by the delegates, will have a sitting President of the country who is a member of the NDC as the occupant, with the chairman taking up the position when the party is out of government.

In case the sitting President is not elected the flag bearer of the party, any person elected flag bearer will occupy that position.

It also accepted to expand its constituency delegates to regional conferences from six to eight. Provision was also made for the creation of an office of director of electoral issues and a three-man special complaints committee to deal with complaints of and about party officers.

Consideration and voting on some other proposals, including the amendment of the propaganda secretary’s position in favour of communications secretary or political education officer, were, however, deferred because the issues were either too controversial or the time was not conducive.

Among those who observed the elections, which were supervised by the Electoral Commission, were former President J.J. Rawlings, who sat through for the entire period of the voting.

The President, Professor John Evans Atta Mills, and the Vice President, John Mahama, were also present to witness the collation and declaration of results on Sunday afternoon.

Indeed, the eighth delegates congress virtually brought the seat of government to Tamale, the sprawling capital of the Northern Region. The participants included ministers of state, metropolitan, municipal and district chief executives and other government functionaries from all parts of the country.

Some members of the Diplomatic Corps, including delegates from Europe, North America and some African countries, also graced the three-day event which was on the theme, “Fulfilling the Better Ghana Agenda”.

Before the commencement of business on Saturday, solidarity messages were read by representatives of some political parties and the diplomatic community.

After the closing remarks by President Mills, delegates, sympathisers, as well as followers of various contestants, poured onto the streets of Tamale in wild jubilation, amid drumming, singing and dancing. They also sang praises to God for seeing them through a very successful and peaceful congress.