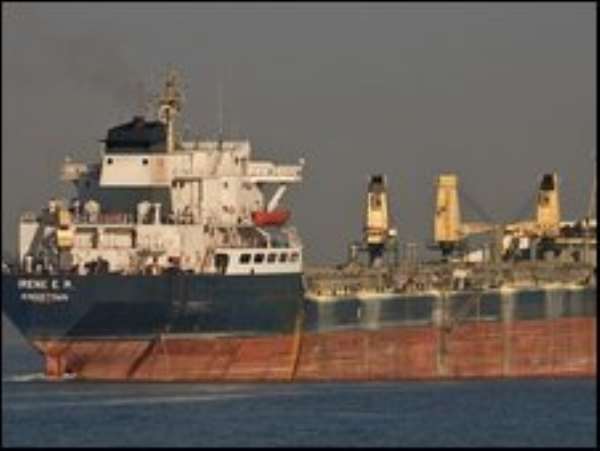 
Somali pirates have been fighting over a huge ransom paid to free a Greek-owned oil tanker, pirates and a maritime official said.

The argument between rival pirate gangs means that the ship, the Maran Centaurus, has not yet been freed, a local group that monitors piracy said.

The Maran Centaurus was seized in November with 28 crew members.

As the ransom was due to be delivered on Sunday, pirates on board the tanker and others in speedboats were reportedly already firing weapons at each other.

"The argument intensified when the ransom money was brought," Ahmed Ganey, a member of the gang that hijacked the ship, was quoted as saying by the AFP news agency.

"Some of the pirates are on board the ship while others are onshore and refusing anybody to get down or to go on board," he said.

'Stand-off'
"The problem is now that the pirates on the vessel will not be able to return to the shore, because of the infighting," said Ecoterra International, a Nairobi-based group that monitors shipping off Somalia.

"At present there is a stand-off and nobody can predict how the release will develop."

When it was hijacked the Maran Centaurus was sailing near the Seychelles in the Indian Ocean, about 1,300km (800 miles) off Somalia.

Its crew is made up of 16 Filipinos, nine Greeks, two Ukrainians and one Romanian. It is carrying about two million barrels of oil.

War-torn Somalia has had no functioning government since 1991, allowing pirates to operate along the lawless coast almost with impunity.

In recent months, the pirates have started operating further from the Somali coast as international navies try to protect shipping against attacks.

In November 2008 another oil tanker, the Sirius Star, which was also carrying some two million barrels of oil, became the largest ship ever seized by pirates.

The vessel was released in January after a ransom of $3m (then £1.95m) was paid.