NDC: Party unity to be tested in Tamale 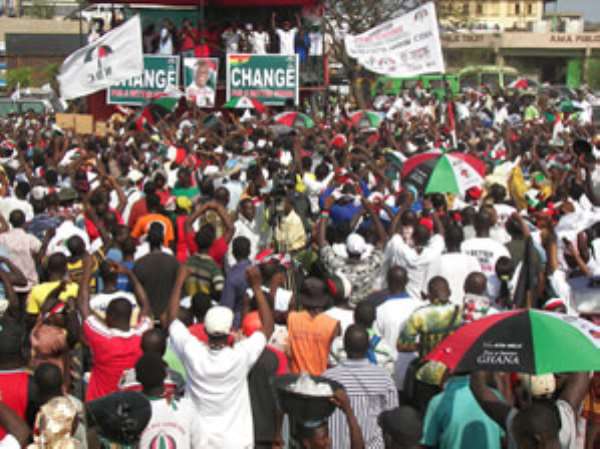 
The unity and strength of the ruling National Democratic Congress (NDC) will come under test as the party holds its first post election victory congress since the 2008 polls in Tamale today January 15.

The fate of the NDC, in a congress described by some political analysts as a make-or-break affair, lies in the hands of about 2,000 delegates who will elect national executive officers to plot another electoral victory in 2012.

The congress comes amidst speculations of factionalism with the party along lines of those of former President J.J. Rawlings and President J.E.A Mills.

It is with such anxiety that hundreds of NDC supporters are trooping to Tamale for the congress this weekend.

Some political analysts believe the Tamale congress has a lot of implications for the fortunes of the NDC in the next general election.

“I'm expecting them to come out tops in all these because if they fail, that will be a recipe for defeat in 2012,” Mr Kingsley Adjei, a lecturer at the Department of Sociology at the University of Cape Coast, told the Graphic.

However, the leadership of the NDC has dismissed such fears, expressing optimism that the party would emerge from Tamale stronger and more united.

At a press briefing in Accra last Wednesday, the outgoing National Organiser of the NDC, Mr Samuel Ofosu-Ampofo, said, “The NDC has grown beyond factionalism and personalities.”

One of his two deputies, Mr Elvis Afriyie-Ankrah, also dismissed the assertion that the party was divided, saying they all belonged to one camp – the Rawlings camp.

The dismissals notwithstanding, political watchers such as Mr Adjei believe the factionalism within the NDC is real and the earlier the party deals with it, the better it will be for its chances in election 2012.

According to him, former President Rawlings and his wife, Nana Konadu Agyeman Rawlings, should have stayed above any faction in the party because they were persons to look up to when anything went wrong in the party.

He said the recent election of the party's youth and women's organizers, both of whom were considered as coming from the Mills camp, lent credence to the perception that the popularity of former President Rawlings in the NDC was waning.

Mr. Adjei said given those circumstances, if the candidates from the Rawlings camp did not succeed at the Tamale congress, there would be apathy in the party and that “will be disastrous for the party in election 2012”.

He said the charisma of former President Rawlings in the electoral fortunes of the NDC could never be washed away.

Following the party's national youth congress in Sunyani recently, one of the contestants for the national youth organizer position, Ras Mubarak, alleged that the election had been fraught with bribery and vote buying. Mobile phones and money were alleged to have been used to influence the delegates in the voting.

Some NDC members have condemned the allegations and called for investigations to ascertain the truth, adding that vote buying and bribery had the tendency to undermine internal party democracy.

However, according to Mr Afriyie-Ankrah, the allegations were nothing new, especially after people had contested and lost elections.

Sharing some thoughts on the issue, Mr Adjei said such tendencies were dangerous to the country's democracy because they led to putting square pegs in round holes.

The vote buying and bribery allegations reinforce the power struggle within the NDC, but one other challenge that confronts the party is how a national executive composed of person from the Rawlings and the Mills factions or individuals with deep-seated difference will function effectively.

Apart from the popular media fracas between Dr. Ekwow Spio-Garbrah and Mr Ato Ahwoi, the recent altercation between Nana Konadu Agyeman Rawlings and the NDC General Secretary, Mr Johnson Asiedu Nketiah, over the role of the 31st December Women's Movement in the NDC provide the basis for such concerns

Prior to the 2000 elections, the NDC experienced similar party wrangling and suffered badly with the breakaway of some members who later formed the National Reform Party (NRP).

In the subsequent election, the party lost power to the New Patriotic Party (NPP), sending it into opposition for eight years.

Meanwhile,Zakaria Alhassan reports from Tamale that the excitement over the congress is gradually heating up in the metropolis with the expected arrival of delegates Thursday.

Over 2,500 delegates and observers across the country and beyond are estimated to mass up in the metropolis for the eight delegates conference of the party that is being held in Tamale for the first time.