Alzheimer's disease 'could be detected by eye test' 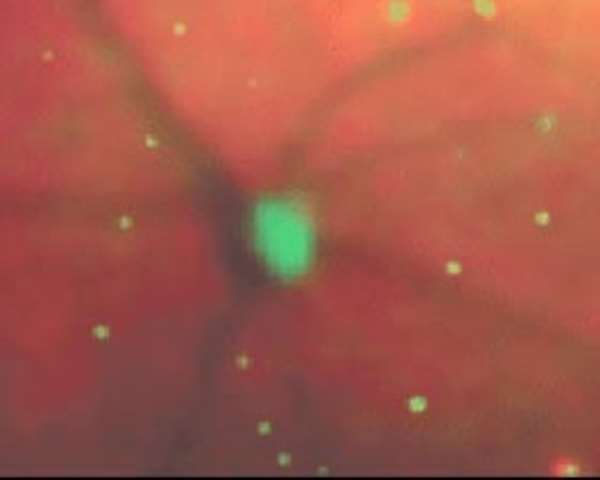 A simple eye test might be able to detect Alzheimer's and other diseases before symptoms develop, according to UK scientists.

The technique uses fluorescent markers which attach to dying cells which can be seen in the retina and give an early indication of brain cell death.

The research has been carried out on mice, but human trials are planned.

Scientists from University College London hope this could lead to a high street opticians test for the disease.

The research, which is published in the journal, Cell Death and Disease, could enable scientists to overcome the difficulty of investigating what is happening inside the brains of those with Alzheimer's.

They currently have to rely on expensive MRI scans or post-mortems.

Fluorescent dye
This new technique enables scientists to track the progress of brain disease by looking at dying cells in the retina.

The cells show up as green dots because they absorb the fluorescent dye.

The research has so far been carried out on mice, but the team is optimistic that the technique can be translated to humans.

Professor Francesca Coredeiro, lead author from University College London Institute of Ophthalmology said: "Few people realise that the retina is a direct, albeit thin, extension of the brain.

"It is entirely possible that in the future a visit to a high-street optician to check on your eyesight will also be a check on the state of your brain."

"I hope that screening for Alzheimer's will be available on the high street within five years."

She said the research could help scientists to see how the disease is progressing by comparing retinal cell death a few weeks apart.

"Currently, the biggest obstacle to research into new treatments for neurodegenerative diseases is the lack of a technique where the brain's response to new treatments can be directly assessed - this technique could potentially help overcome that."

Patient trials
The first patient trials to assess the technique for the eye disease will begin later this year.

Rebecca Wood, Chief Executive of the Alzheimer's Research Trust, said: "These findings have the potential to transform the way we diagnose Alzheimer's, greatly enhancing efforts to develop new treatments and cures.

"If we spot Alzheimer's in its earliest stages, we may be able to treat and reverse the progression of the disease as new treatments are developed.

"Dementia scientists currently lack a way of assessing the brain's responses to new treatments in real time; this technique may help overcome that obstacle.

"700,000 people in the UK live with Alzheimer's and other dementias, and that number is set to double within a generation unless scientists make rapid progress in their race for a cure."

Dr Susanne Sorensen from the Alzheimer's Society also welcomed the research, but stressed much more research was needed to see if the technique could indeed be used to diagnose the disease, or monitor the effects of drugs under development. Source: BBC news

Akufo-Addo appoints UG pollster as Director of Research at t...
24 minutes ago

Muntaka has defamed all Supreme Court judges with bribery cl...
24 minutes ago