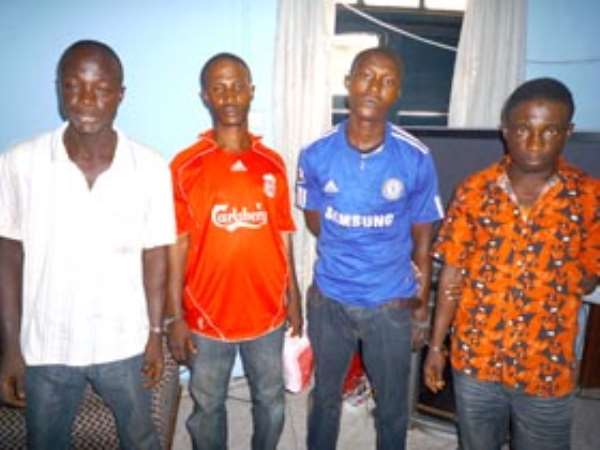 THE FOUR armed robbers who killed a 26-year-old pastor during a robbery operation recently at Gbawe, yesterday shocked an Accra Circuit Court trying them for robbery when they admitted that they were ready to face any form of punishment including death for the offence they committed.

The accused persons, Yaw Asamoah, 30, Kofi Yeboah, 30, Kwabena Ebo, 30, Osei Prempeh 23, are facing a total of seven counts of conspiracy to commit crime, causing harm and robbery in three different cases at the court, presided over by Patience Mills-Tetteh.

One of the accused persons, Kofi Yeboah, made a dramatic confession, remorsefully admitting that he and his colleagues were guilty of all the charges leveled against them; therefore the court should not waste time in pronouncing judgment.

This happened just after the prosecutor, Inspector Anthony Afetsi, had finished reading all the charges and the facts of the case to them. He had not even read their plea when the bombshell was dropped.

Yeboah, in his confession, admitted that they used the same weapons for all their operations, adding that they killed the pastor with a pump action gun which they stole from one Eric Aggrey-Carthy, a banker, the previous month.

He observed that he and his colleagues had offended God and the country, and for that reason, they deserved any punishment that was meted out to them.

“My lord, the crimes have already been committed and there is nothing we can do about it. Please jail us now. Even if the punishment will take our life, we are ready to die for the sins we have committed,” Kofi Yeboah prayed the court.

The other accused persons later joined in the confession, during which they begged all the complainants including the family of the late pastor and Ghanaians as a whole for forgiveness.

The accused persons were yet to be charged for murder.

Pastor Peter Addy In response, the Judge remanded them into police custody to re-appear on January 21, 2009, following the prosecutor's notification that investigations were still ongoing.

The prosecutor, briefing the court on one of the robbery incidents, stated that the complainant, Eric Aggrey-Carthy, lived with his family in his uncompleted house at Red Top Donkuna, New Bortianor in Accra.

According to the prosecutor, on November 30, 2009 at about 5.00am, the four accused persons, armed with a pistol, cutlasses, crow bars and pump action guns, broke into the premises of the complainant and attacked his house by holding him hostage.

They made away with his pump action gun, one full box of cartridge, his car key, one laptop, some mobile phones and cash amounting to GH¢70.00.

The prosecutor further disclosed that the accused persons, who were not satisfied with their loot, struck again a month later.

They attacked the residents of Gbawe, robbed them of their personal belongings and in the process killed Pastor Nii Addy of Light House Chapel before fleeing.

The prosecutor stated that they had earlier stormed the house of one Martin Adjei at Red Top Donkuna, New Bortianor, and robbed the occupants of GH¢1,700, five mobile phones and some personal effects of unknown value, after which they shot the leg of one Michael Agbeley.

The robbers also forcibly broke into the house of Kwadwo Antwi on November 13, 2009. Mr. Antwi, an auto mechanic and his family were held hostage with guns whilst the robbers made away with laptops, four mobile phones, one detector machine and GH¢160. They subjected Mr. Antwi to severe beatings in the course of their operation.

However, luck eluded the accused persons on January 6, 2010. While preparing to rob another person, they were arrested following a tip off.

Reason why Kwame Nkrumah's children were prevented from seei...
52 minutes ago