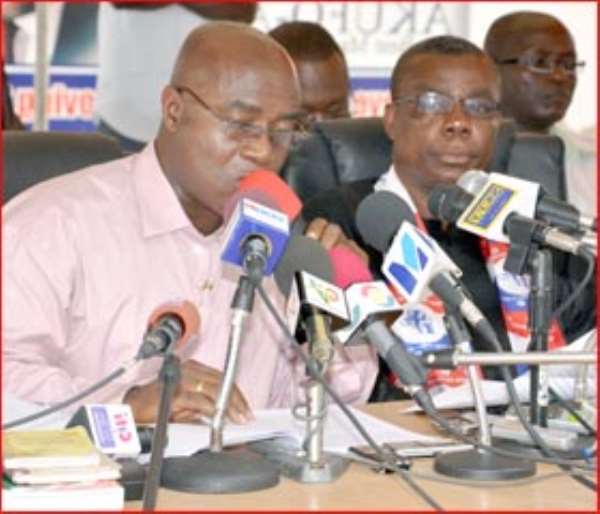 The New Patriotic Party (NPP) has accused President Atta Mills of adopting double-standards in his perceived fight against corruption, and pretending to have virtues and principles, which he does not have.

Osei Kyei-Mensah-Bonsu, the Minority Leader in Parliament, made the accusation on Thursday at a news conference organized by the NPP leadership to access the performance of the Mills-led Government within the last year.

“There cannot be any shred of doubt that the one-year rule of the Professor Mills' NDC can be captured in one simple phrase: a catalogue failed promises.

No one could be in doubt that the performance of the Prof. Mills-led NDC has been most abysmal.  Indeed, the administration is nothing but a tale of failed promises,” Mr. Kyei-Mensah-Bonsu noted in his 40-page press statement.

Explaining the accusation of double standards, the Minority leader said though President Mills rode to power on the wings of promise-mongering to reduce the tax components on a number of products, he had turned round to do the exact opposite by rather introducing new taxes on almost every commodity, including Akpeteshie.

He added that the President had reneged on his promise to set higher standards in his fight against corruption by introducing a concept of “indiscretion” to describe a situation which was clearly illegal.

“How can any person describe an act of misrepresenting facts in bad faith to enable another person enjoy benefits which would otherwise not accrue to that person as mere indiscretion?

“In the circumstances, the President has not only failed to be a better crusader against corruption than President Kufuor, but has introduced double standards in the criminal jurisprudence  of Ghana, to wit, that criminal acts by his appointees are acts of indiscretion but for others, prosecution before a court of competent jurisdiction.

“There appears to be a difference between the President's political appointees and other Ghanaians in respect of the investigative institution which was employed to investigate allegations of impropriety,” Kyei-Mensah-Bonsu noted.

He said the Atta Mills-led Administration had failed to take any bold economic decision that would yield fruitful results and that the fiscal indicators were worryingly gloomy.

On education, the Minority Leader said it was expected that the government would have given due weight to the education sector budget but rather, the government gave the usual ministerial allocation with a small top up

The conference was attended by a number of NPP parliamentarians and leading members of the party.