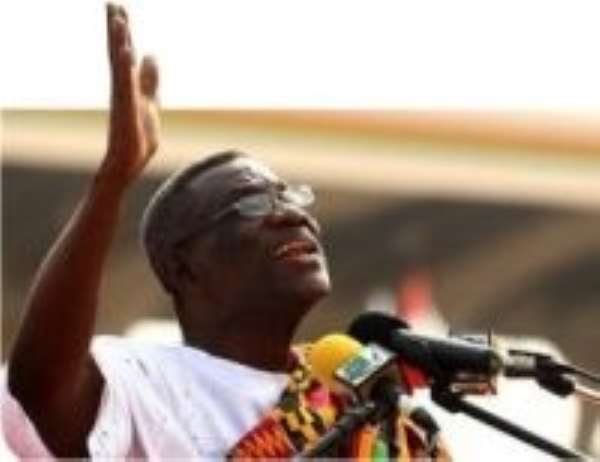 By Concerned Ghanaians in the U.S

Between 2001 and 2008 Ghana experienced a phenomenon that came to be known as reverse immigration whereby many Ghanaian in various capacities relocated to Ghana to do business and to tap into various areas of investments.

The Ghana National Petroleum Corporation participated in almost every annual petroleum exhibition in Taxas (the oil capital of the World) to promote Ghana's hydrocarbon potential.

It is on record that Oil giants like Amoco, BP, Hunt oil, Santa Fe, Nuevo Energy ,CMS, SFO and many others have visited and done some work in Ghana but could not make any headway for various reasons including encountering a rigorous petroleum agreement and finding oil not in viable commercial quantities.

At a time Ghana's oil was labelled as unfruitful by these oil giants with no oil company willing to take any more financial risk in Ghana it took two Ghanaian professionals living in the United States who sacrificed their businesses and income to convince potential investors to come to Ghana to tap into the oil reserves.  They did not have to be President Kufour's friends to be able to do this. Their desire to do this was not borne out of quest for financial favour from any quarters but out of personal desire to do something for Ghana. They have a proven track record of facilitating investment to Ghana even before president Kufour came to power.

The effort of the joint venture of these two professionals being Dr. Kwame Bawuah -Edusei and George Owusu who constitute the EO Group ended years of wasteful spending by the government of Ghana on ventures that the GNPC had been engaged in for years that had nothing to do with Oil.

Around 1995 the activities of GNPC had cost the Government millions of dollars with over drawn accounts at the Bank of Ghana and the company had no reason to exist. The company then under Tsatsu Tsikata who had placed his stooge at the helm of affairs at the Exploration department, his then girl friend and later wife as the Head of Public affairs used his connections at the castle to keep the company afloat. In the mid 90's every GNPC employee was tight lipped on the wasteful spending going on.

GNPC was perceived to be a drain on the economy of Ghana and the only thing that has brought glory to the Company today and has vindicated GNPC is the successful oil find by Kosmos who were brought to Ghana by the EO group.

Media reports gathered after a press briefing by Ghana's Attorney General is that the EO Group will be charged with alleged wrongdoing in its dealings with KOSMOS which helped secure control of Ghana's oil block that yielded one of Africa's biggest oil discoveries.

Today the partners of the EO group have come under a barrage of attacks and political witch hunting by the Government of Ghana for their role in the GNPC, Kosmos venture which is not unusual in Petroleum exploration agreements. Before Anadarko joined the venture the EO group was thoroughly investigated and they came out clean.

It should be noted that no reputable oil company would be part of a fraud induced agreement and Kosmos as a reputable firm and could not be party to that if there were any issues of wrong doing on the part of the EO group.

Dr. Kwame Bawuah-Edusei was not appointed Ambassador because of any sort of relationship with President Kuffour. It should be noted that the US Diaspora was his constituency and as a community leaders he had been involved in various initiatives that brought him to the lime light. As a medical practitioner, accepting the post of Ambassador was a big pay cut but for the love of his country Ghana it was a sacrifice worth giving.

After his service as Ambassador he has humbly moved back to his residence he purchased about 15 years ago and in the process of reestablishing his medical clinic.

At a recent town Hall meeting with Professor Mills at the Embassy in Washington DC, the energy and finance ministers continued to sound the clarion call for Ghanaians in the Diaspora to come home and tap in investment opportunities that abound in the motherland. Hon. Oteng Adjei emphasized the need for Ghanaians to purchase oil blocks however if this is the kind of treatment and embarrassment that waits any potential investor then I guess US diasporans would have to coil up and look elsewhere after all the United States is about in such opportunities.

It is very pathetic that that our political judgments have been clouded with avowed penchant for prosecution and political bigotry rather than generosity with praise for those through whom the image of Ghana is redeemed.

Signals have been transmitted to potential investors that their hard earned reputation could be sacrificed at the altar political witch hunting which could have future damaging repercussions on Ghana's investment climate.

According to expert findings, contrary to speculations in the Ghanaian media and political circles, the EO Group is not under any kind of Investigations by United States Authorities.  These gentlemen have been deemed to be innocent from previous reviews.

Concerned Ghanaian citizens in Southern USA have pledged their undaunted support to the EO Group and would go to any length to defend them vigorously.

Please leave the EO Group alone if Ghana is eager to benefit from any sustainable investment drive from the Diaspora in future.