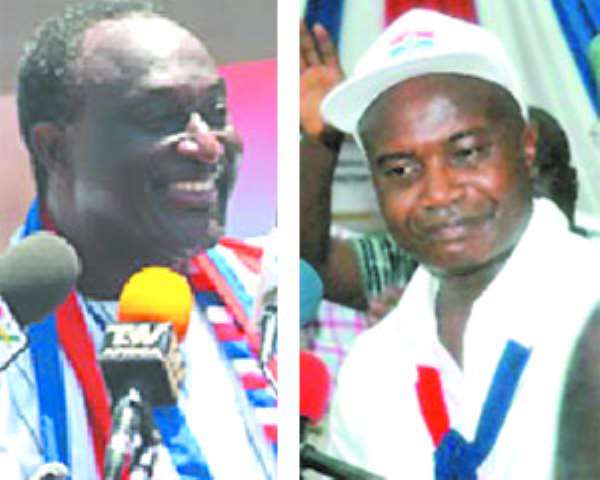 AN aspiring national chairman of the opposition New Patriotic Party (NPP), Mr. Stephen Ayensu Ntim, has debunked the notion by his detractors that he is an agent of Mr. Alan Kyerematen, a former trade and industry minister in the past Kufuor administration, and one of the NPP gurus aspiring to become the presidential candidate of the NPP.

Launching his campaign in Takoradi yesterday to officially announce his decision to contest for the position, Mr. Ntim described the notion that he was an Alan boy, as a negative campaign issue being bandied around deliberately by his detractors, who are sensing that his victory for the national chairmanship has already been written on the wall.

He told delegates of the party, amid cheers, "I am not an Alan boy. How can I be an Alan boy when I am 51 and he is 54,” he asked, adding "Anything that Alan can do, and he is doing it right now, Stephen can do the same thing.

Not only that, anything that Nana Addo can do, and he is doing it right now, Stephen can do the same thing, and perhaps do it better. I can decide to put down the chairmanship ambition, and go for the flagbearership," he said.

He assured the delegates of the party of his neutrality should he become the national chairman, pledging to build everlasting bridges that would iron out the differences among party members, from the polling station, constituency and regional, to the national level of the party.

The former first national vice chairman of the NPP said his experience in the past administration, which was led by Mr. Harona Esseku, which successfully increased the number of seats of the party from 101 in 2000 to 128 in the 2004 general elections, would guide his administration if he becomes the next national chairman.

He vowed never to repeat this in his administration, saying, "Let the constitution of the party work.”

He said there was no apparent reason for the imposition of the parliamentary candidates, which unfortunately, and eventually, caused the defeat of the party in the last elections.

Except what he termed as flimsy excuses, some leaders were charging candidates who were ready to pay to be imposed on the party, the lack of unity and purpose, good initiatives and general neutrality in the parliamentary race among others as some of the lapses.

All these lapses on the part of the leadership of the party, he assured the delegates of the NPP, would be kicked against under his tenure as the national chairman, should they entrust the destiny of the party into his hands.

For the NPP to be able to win the 2012 elections, he said unity among party members would be crucial, since according to him, "Unity is the engine of the party, and if that is broken, you need to fix it, and I will do that," he maintained.