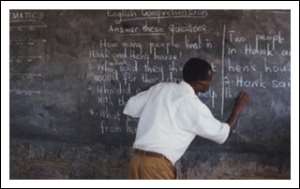 ... for derogating against Prez, Minister

The Western Regional directorate of the Ghana Education Service (GES) has been ordered to cause the immediate release of four teachers from the region. The Western Regional Minister, Mr. John Boahen Aidoo who gave the order explained the reason behind the directive as gross misconduct on the part of the affected teachers. The Regional Minister, who is also the MP for the Wassa Ainenfi East constituency , in a letter of August 12 gave a 24 hour ultimatum to the directorate to transfer the affected teachers. They are Richmond Atsu Babamawo, Bernard Dzorkpe and David Walanyo Amadzo of Wassa Afransie JSS/Primary schools in the Arnenfi District and Richard Etse Babamawo of the Juabeso-Bia district of the GES and a twin brother of Atsu Babamawo. Mr. A.A. Dramani, the Regional Director of education is also to ensure that the vacancies thus created are filled. According to an accompanying report, the Minister during a visit to his hometown,Wassa Afransie on August 11, was informed about the misconduct of the said teachers. He said, following a misunderstanding between one of the teachers and a townsfolk, the teachers passed derogatory remarks about the President and the Regional Minister to the effect that the President had no foresight else he would not have appointed Aidoo, a native of that small town of Wassa Afransie as the regional Minister. ‘Only President Kufuour would stoop too low and appoint a minister from this village’ the teachers reportedly complained. The teachers are also alleged to have meted out inhuman treatment to pupils , an issue which was partly resolved by school authorities, PTA and elders of the town. The regional minister noted that the fact that it was difficult to get teachers to teach in remote areas did not mean teachers could misbehave. Minister Aidoo, the Chronicle gathered, acting in his capacity first as citizen of Wassa Afransie and MP for the area and third a Regional Minister seized the opportunity to talk to the teachers, but they would not listen to advice. For instance, Atsu Babamawo, one of the errant teachers, even sports a ring in one ear which lifestyle the regional minister considers might impact negatively on the pupils. Minister Aidoo explained that the decision to release the said teachers from “his” region was without prejudice to their identity as Ewes from the Volta Region. “Indiscipline does not pertain to drivers, students and unemployed youth alone” . Meanwhile, David Walanyo Amadzo has petitioned the GNAT ( regional and district levels) against the minister’s directive. He considered the Minister’s intervention as interference. According to Amadzo, the minister was not happy with the punishment he meted out to the children and expressed surprise at a minister of state frowning on a teacher punishing a pupil for wrong doing at a time the government, of which Minister Aidoo is a part, was calling for a crusade against indiscipline. Amadzo,who was transferred to the region and to Wassa Afransie eight years ago says he is shocked at the turn of events as he had never come into conflict with anybody in the town neither has he misconducted himself there all these years.