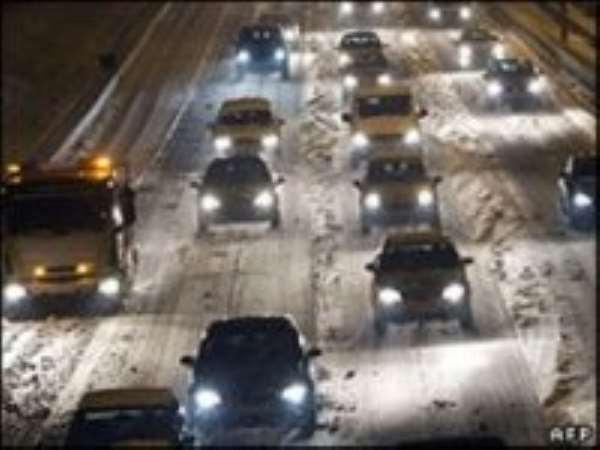 The icy weather gripping parts of Europe has disrupted flights at airports in the UK, France, the Irish Republic and the Netherlands. Many flights were delayed or cancelled at Orly airport in Paris, Dublin airport and Amsterdam-Schiphol, as well as major UK airports. In Germany, at least nine homeless men aged from 42 to 62 froze to death.

A Eurostar train was stuck for about two hours in the Channel Tunnel on Thursday. It later reached the UK. Four other Eurostar trains were cancelled, a company spokesman said.

Last month the Eurostar service was suspended for three days after several trains broke down in the tunnel. Powdery snow getting into the engines was identified as the cause.

In the North Rhine-Westphalia region two derailments in as many days have caused havoc with the rail timetable, triggering cancellations and delays. In the Irish Republic, Dublin airport is open but Knock airport has suspended flights. All roads into Dublin are extremely icy and hundreds of Irish schools have closed, the Irish Times reports.

In southern England, some 4,000 people were left without electricity after snow brought down power lines. The cold snap is also affecting Scandinavian countries. In Hemavan, in the far north of Sweden, a new winter low of -40.8C (-41.4F) was recorded overnight, Radio Sweden reports.

The Arctic freeze has also seen temperatures in central Sweden plummet to between -30 and -40C the coldest weather since the mid-1980s. In Norway, temperatures plummeted to -40C in some areas. The capital Oslo ran a reduced bus service because engine oil had frozen.

In Austria, the authorities are on standby amid forecasts of heavy snow in the coming days in low-lying parts of the country. The winter death toll in Poland has reached 122 - most of the victims reportedly homeless people. In Burzyska nad Bugiem, in the east of the country, the army has installed makeshift bridges after flooding and ice split the village in two.