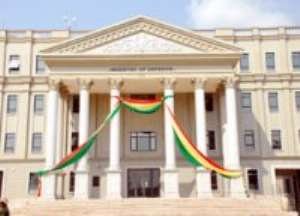 The Vice President, Mr. John Dramani Mahama yesterday reviewed a guard of honour mounted by nine officers and men of the 5th battalion to signal commencement of operations at the New Ministry of Defence Building in Accra.

The magnificent building, constructed with a $50 million Chinese grant, secured through collaboration between the Government of Ghana under the previous administration and the Chinese government, will now serve as the new Ministry of Defence.

Mr. Mahama, addressing staff and guests, said the building is a manifestation of the goodwill of the Chinese Government to the Government and people of Ghana, and described it as a living testimony of the bonds of friendship between China and Ghana which is “amply captured in stone, concrete, marble and granite for this and future generations”.

The building, he said, will serve as the fortress in which the government will make all plans and decisions to protect the sovereignty and strategic interests of the nation.

He acknowledged the effort of former Defence Minister, Dr. Kwame Addo Kufuor, through whose initiative the project started and reiterated the government's commitment to continue with all desirable projects started by previous regimes.

He said the security sector has joined the rest of the public sector in undergoing reforms that will enable it remain current and abreast with changes and transformations taking place in all aspects of the nation.

The Vice President noted that the nature of threats to the nation evolves daily, and policies to address these threats should be as dynamic as the threats and handled by trained multi-disciplinary team of civilians and military, equipped and committed to the defence of Ghana.

He said Ghana needs to prepare not just to keep up with change, but also to anticipate and confront new challenges such as protecting the oil industry, eliminating drug trafficking and maintaining a full grasp of element of peace and stability beyond Ghana's borders.

He praised the armed forces for their role in international peace keeping and stated the Ghana Armed forces are concerned with events in Darfur, Somalia, and Chad, as well as the atrocities of child soldiers, rape, abductions and depravity in these communities. The issues of proliferation of small arms and money laundering in the West African sub region are also of equal concern to the army.

In view of this, the government, the Vice President said, is committed to the Draft Framework for a Common African Defence and Security Policy adopted by the African Union and will subscribe to the establishment of an African Standby Force.

He said the thrust of the Government's policy on defence is to intensify efforts aimed at modernising the Ghana Armed Forces under civil control. In line with this policy, the military will be equipped with new technologies and strategies to ensure that within the next four years, the efficiency, confidence and the morale of the armed forces is raised to an enviable level for both internal and external security operations.

He said the economic, social and political ties between Ghana and china has been growing from strength to strength, and it is demonstrated by the Chinese government's assistance in the construction of the national theatre, the ongoing Bui Dam project, several road networks and the pledged by the Chinese government to re-construct a new Building for the Ministry of Foreign Affairs.

The Minister for Defence, Lt. General Henry Smith, said ground was broken on April 19, 2007, by H.E. Jia Qingling, chairman of 10th national Committee of the Chinese People Political Consultative Conference. The new Ministry of Defence building, according to the Minister, has 120 rooms on four floors and adequately equipped for any eventuality.

The Chinese Ambassador to Ghana, H.E. Yu Wenzhe said the construction of the building is the results of collaboration between the two governments and marks another landmark of friendship between the two countries.