Mpiani & Wereko-Brobby to refund about $1.5m 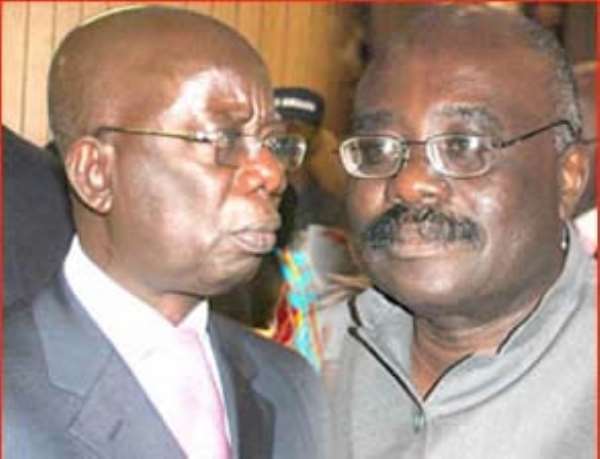 The Presidential Commission which probed the [email protected] celebrations has recommended that Former chief of staff and Chairman of the Celebrations, Kwadwo Mpiani as well as the CEO of the erstwhile [email protected] Secretariat, Dr. Charles Wereko Brobby be made to refund about $1.5 million to the state.

According to information contained in the executive summary of the report of the Justice Douse-led commission Dr. Wereko Brobby and Kwadwo Mpiani “deliberately disregarded and usurped the powers of parliament to do the following:

Utilized internally generated funds of GH¢ 19, 352, 498.00 without first obtaining the consent of parliament;

For that reason, the commission has recommended that “Parliament may cause the CEO (Dr. Wereko Brobbey) and the chairman (Kwadwo Mpiani) to be tried before it for contempt of parliament.

Depending on the discretion of the Government, the two former officials may also be prosecuted under section 179A (3) of the Criminal Offences Act, 1960 (ACT 29) for “Causing loss to the state”.

The commission maintained that the decision by the two officials “to exceed the approved budget was willful”, for which reason “the government has incurred serious loss.”

This conduct, according to the report has ballooned government's expenditure for the [email protected] celebration “by reason of the fact that the government has to pay over two years of interest on all outstanding debts in the sum of GH¢ 12, 598,352.19 due and owed to contractors/suppliers/consultants and has had to pay interest in the sum of GH¢ 3,082,955.20 on the authorized loan procured from Prudential Bank.”

The commission also disclosed that the Decision of Dr. Wereko Brobbey and Mr. Kwadwo Mpiani to “circumvent parliament with regard to the SSNIT/AUDL loan was willful.”

“The AUDCL/SSNIT loan is escalating. It is unlikely that there will be any residue from the sale of the remaining 15 mansions after the SSNIT loan has been settled from the proceeds.”

The Government has also lost an amount of US$ 360,000.00 and therefore has to pay an outstanding rent of US$ 150,000 to Largus Forte Hotel. The state has to incur this total amount of US$ 510,000.00 because an agreement between UAML and the secretariat failed to make provision for the recovery of the first year rent.

The Government, per the recommendations of the commission has the option to “recover this sum jointly and severally from the CEO, (Dr. Wereko Brobbey) the Chairman (Mr. Kwadwo Mpiani) and UAML or its Managing Director, Sandy Osei Agyeman.

The three member Commission submitted the final report to President Mills on Wednesday, December 23, at the Castle Osu.

Upon receipt of the report, President Mills assured Ghanaians that his administration will study the recommendations carefully and act without any fear or favour.

“…as we go through the report, I want to assure you that your recommendations are going to be studied with all seriousness and whatever action has to be taken will be taken without fear or favour.” he said.

The Commission was established by the President on June 1, under Article 278 Clause 1(a) of the Constitution and inaugurated by Vice President John Dramani Mahama on June 17.

The Commission in the course of the public hearings took submissions and petitions from the district assemblies, regional co-ordinating councils, private entities, service providers, technocrats, construction firms, consultants, the [email protected] Secretariat and the Office of the Chief of Staff.

In all the commission took submissions from 238 witnesses, who were directly or indirectly involved in the 50th Independence anniversary celebration of Ghana.