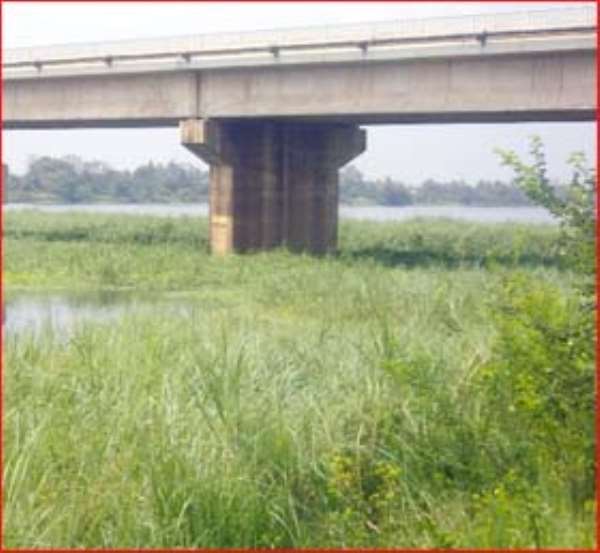 Health risks are also a concern because of the reduction in the quality of drinking water and the density of the plants, which harbors snakes and Bilharzia carrying snails.

The Environmental Protection Agency (EPA) estimates over 5000 hectares of land carpet the Ghana side of the Tano River alone, with infestation of the Kpong Head-pond in excess of 1500 hectares.

At the conference on December 8, 2009, Drama Network Chairman, Ben Sackey revealed financial gains from the Saikope and Tsetsekpo initiatives, providing incentives for other communities to follow suit.

Upon advertising the compost for sale, the projects batch, which comprised of some 1000 bags, was bought by a single buyer.

“The potential to boost agricultural production and the socio-economic status of communities is promising,” he told CITY &BUSINESS GUIDE.

“When tilled into soil, composting reduces the need for insecticides and fungicides on the account of plants supporting micro-organisms.

“It also serves as food for animals and reduces waste,” Mr Sackey stated.

Furthermore, the chairman of Drama Network described the process as “an ideal community venture because it can be undertaken on a small-scale with basic tools and widely obtainable ingredients.”

The process takes 63 days with an additional time for cooling before packaging for sale.

According to Mr Sackey, applying the composting process to weeds has proved as “the best and least expensive method to manage the proliferation of weeds.”

“135 bags of compost require approximately GH¢80 in expenditure. The profit margin is around 50 percent with each bag that is sold for GH¢4.5,” he added.

While these figures are estimated, Drama Network will release more specific analysis of the figures shortly.

Despite this clear potential, composting aquatic weeds has not proved popular with communities. “They believe that the weed problem is the fault of the Volta River Authority (VRA) and that they should remove them.

“The locals must be trained to harvest weeds themselves, which they are reluctant to do,” Sackey stressed.

He however did not blame the communities for their hesitancy due to the physical nature of the task. 420metres square of weeds can weigh up to 34,000kg; making aquatic weed removal a laborious effort, particularly when the river bank is steep.

“We appreciate the need to create incentives,” he told CITY&BUSINESS GUIDE, expressing the hope that the distribution of compost manuals, capacity building at the conference and the EPA's endorsement of the method will popularise composting as a weed management strategy.

The EPA announced that government was sourcing a $2.5 million loan from the African Development Fund to create sustainable solutions to tackle the issue, with the current EPA, VRA and NGO projects expected to clear 250 hectares of land manually by the end of this year.