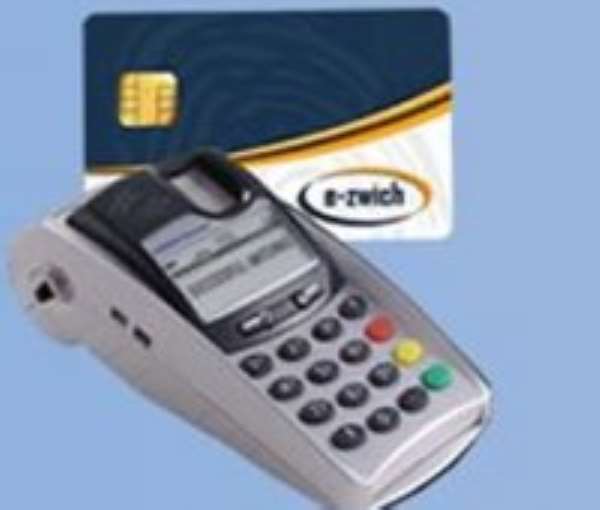 Twenty new e-zwich compatible Automated Teller Machines (ATMs), have been imported for installation at different locations in the country. Mr. Archie Hesse, General Manager, Project and Business Development at Ghana Interbank Payment and Settlement Systems (GhIPSS) said the ATMs will be located at vantage points to complement the few that have  already been rolled out.

So far four of the e-zwich compliant ATMs have been installed in the country, two in Accra, one at the Cape Coast University Campus, and the fourth at the Kwame Nkrumah University of Science and Technology in Kumasi.That of the University of Ghana campus will be installed shortly, Mr. Hesse said.

The ATMs according to GhIPSS accept any e-zwich card regardless of the holding bank. This will enable people to access cash on the e-zwich from any of these ATMs.

Mr. Hesse said a process is underway to make existing ATMs of the various banks in the country e-zwich compliant."When this happens, bank customers will not need to move long distances to access cash but can withdraw from any ATM at all using the e-zwich card," he said.

The e-zwich was introduced last year by the Bank of Ghana with the aim to modernise the payment system.The biometric card also enables the holders to avoid the loss of their money through robberies or negligence, because the cash will remain on the card and can be accessed on replacement of the card. Additionally, no one can use the money on the card because it requires the live fingerprints of the owner.

Since its introduction last year, well over 300,000 people now own the card.

Mr. Hesse said the e-zwich card services have generated a lot of interest in the rural areas with many people using the card to transact business and to transfer money. Some companies are also paying workers salaries on their e-zwich cards and this enable the workers to have immediate access to their pay the very moment they are paid.

So far loans of first year students of public tertiary schools were also paid onto their e-zwich cards, while the service is being extended to national service persons and soon to workers under the National Youth Employment Programme.

Mr. Hesse expressed the hope that the roll out of the new e-zwich ATMs will compliment efforts intended to popularise the use of the cards and particularly encourage many more people to buy from shops, using the modern payment system, as it pertains in advanced countries.

This he said will channel more money into the banking system, stressing that the GhIPSS would continue to educate the public so that the country derives the full benefit of using the electronic payment system.