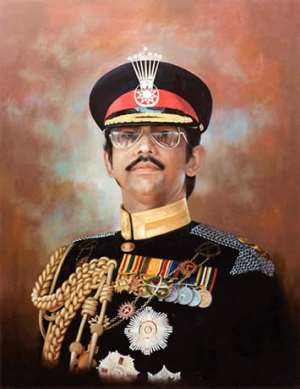 The mystery surrounding the acquisition of four Toyota Land Cruisers by former President Rawlings is set to deepen with a revelation that links His Majesty Sultan Haji Hassanal Bolkiah Muizzaddin Waddaulah, Sultan and Yang Di Pertuam of Brunei Darussalam to the cars. Since Rawlings’ appearance before a panel at the Greater Accra offices of the Bureau of National Investigations (BNI) in the aftermath of the Kumasi ‘Boom’ speech, many Ghanaians have wondered how he came by the four vehicles. An official report on the Rawlings interrogation at the BNI issued by Presidential Affairs and Information Minister Jake Obetsebi Lamptey stated that the former President was among other issues quizzed on the acquisition and purposes for the four vehicles. Rawlings is reported to have told the panel members that they would have to cut his head to elicit the appropriate answer. Rawlings is also quoted to have told the panel that the cars were purchased for him by friends whom he refused to identify. As the security agencies try hard to find answers to the mystery of the Rawlings cars, The Independent has stumbled on unadulterated information from the Rawlings camp to the effect that His Majesty Sultan Haji Hassanal Bolkiah Waddaulah gave the cars to the former President as a gift in response to a request from the former. As The Independent set out to investigate the issues relating to the four cars last week, a lot of possible leads were thrown at us, with the most credible then, being a disclosure from a close Rawlings aide that the vehicles were a donation from the United Nations to the former President. The purpose, according to the Rawlings pal was in appreciation of the former President’s work as a United Nations Eminent Person last year. However, in a chat with Victor Smith, Special Aide to the former President early this week on the issue, he disclosed categorically that he would neither confirm nor deny. “I do not know anything about that and can not tell you anything about that,” Victor Smith said. Not daunted by such gate-keeping , our investigative machinery sent out more deep feelers into the Rawlings circle and by last Friday, all the feedback pointed to the Sultan of Brunei as the source of the four cars as a gift to Rawlings. A source in the Rawlings camp told us that Rawlings knew that Government was bent on retrieving all state vehicles in his possession save one, as provided under the Greenstreet Report and did not want to be caught pants down. “In any case, what is wrong with Rawlings requesting for such assistance from persons he considers as friends?” the source wondered. Rawlings struck a perfect relationship with the Sultan of Brunei in the twilight of his rule leading to the exchange of visits with the Sultan. At a point, it was even rumoured that one of the Rawlings daughters was set to be given in marriage to one of the sons of the Sultan. The cars have already stirred a lot of dust with suspicion that at least one of them is bullet-proof. Parliamentary Minority Chief Whip, Edward Doe Adjaho has however denied this in a statement to the media recently. Rawlings is reported to have paid more than ¢500 million in customs duties for the cars which cost a total of $ 136,200 and were shipped from the Belgian port of Antwerp. The Crusading Guide reported last Thursday that certain procedures regarding the registration of the said four vehicles were circumvented when the picture of a certain Naval Captain Asubonteng’s (R’td) was used on one of the registration forms instead of that of the former President.