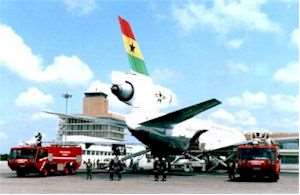 The beleaguered national airline, Ghana Airways would soon be renamed Ghana Nationwide International Airline following a partnership deal signed with Nationwide Airline of South Africa and the Government of Ghana. Sources close to the airline disclosed this to ADM after the Acting Chief Executive and Board Chairman of Ghana Airways Mr. William Blay had met workers representatives to address them on the current state of the airline. Mr. Blay is said to have told workers representatives at the meeting that the new name would reflect the new image of the airline. He said government would also have to find a means of settling the debts of Ghana Airways since Nationwide and the new board would not accept the liabilities of the airline. The Secretary to the Senior Staff Association of Ghana Airways, Mr. D.K Omane in an interview with ADM yesterday said the Ag. Chief Executive confirmed at the meeting that there is going to be a new image for the airline. When asked whether workers would be laid off due to the new partnership with Nationwide he answered in the affirmative, but said, looking at the current situation at Ghana Airways, "there is no need to lose any staff". He said a protest letter to this effect has been submitted to the Minister of Roads and Transport, Dr. Richard Anane to address the issue. He said the Senior Staff Association would ensure that things are done well to save the national airline. Nationwide Airline a domestic South African airline with only seven years experience in airline operations got the nod for partnership over the British Midland and Global Africa Express Consortium whose offer according to industry insiders looks more credible. Global Africa Express would have provided in partnership with British Midland, Britain's second biggest airline, a fleet of 52 aircraft to help solve Ghana Airways financial crisis. Nationwide Airline is offering managerial services with a fleet of 21 aircraft, said to be mainly a mixture of old models. Far from solving Ghanair's problems, it seems this new deal would simply open another can of worms.