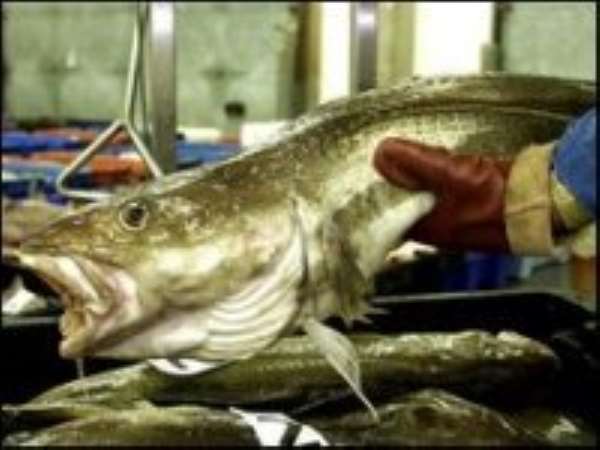 The EU says European fishing fleets will have to cut their catches of cod, haddock and sole next year, but a ban on anchovy fishing has been lifted.

The quota for cod fishing is being cut by 15-35%, depending on the area.

But there is an exemption for cod fishing in West Scotland and the Celtic Sea.

There are increased quotas for some fish, including plaice - by up to 14% - and herring - by 72% in the Celtic Sea.

Anchovy fishing will resume in the Bay of Biscay. A ban was imposed in 2005.

That is seen as good news for French and Spanish trawlers.

But fishing for endangered porbeagle and spurdog sharks will be banned.

One innovation in the EU fisheries policy for 2010 is that crews will be entitled to a 5% larger catch if they install CCTV cameras on their vessels to monitor conservation measures.

The plan is for the cameras - three per vessel - to check on the size of catches and to ensure that crews do not illegally toss unwanted fish back into the sea - a wasteful practice known as "discards".

Denmark has been urging the EU to adopt CCTV on board trawlers. It introduced such a pilot scheme in September 2008.

Conservationists have condemned discards, which arise because the quotas for fish delivered to port often do not match the volumes of fish actually caught.

Earlier this year the European Commission said more than 80% of Europe's fish stocks had been overfished.

He said a "small but increasing" number of stocks was now being fished sustainably.

Final quotas for shared stocks with Norway and the Faroe Islands will not be set until negotiations in January.

Scottish Fisheries Secretary Richard Lochhead said that "given the challenging backdrop, these were always going to be tough talks.

"The outcome will offer some degree of comfort to parts of our industry...

"We have achieved gains for some of our most valuable stocks and secured interim arrangements to ensure stocks shared with Norway can still be fished."

A Scottish Conservative Euro MP, Struan Stevenson, however condemned the outcome, warning of "disaster" for some crews facing not only quota cuts but also cuts in the permitted number of days at sea.

He said the EU fisheries management system "would bring tears to the eyes of a North Korean!"

"The European Commission calls for sustainable fishing, but what we need is a sustainable living for our fishermen."

A new European Common Fisheries Policy is due to be completed by 2012.