WONDERS! A WOMAN DELIVERED A STONE. 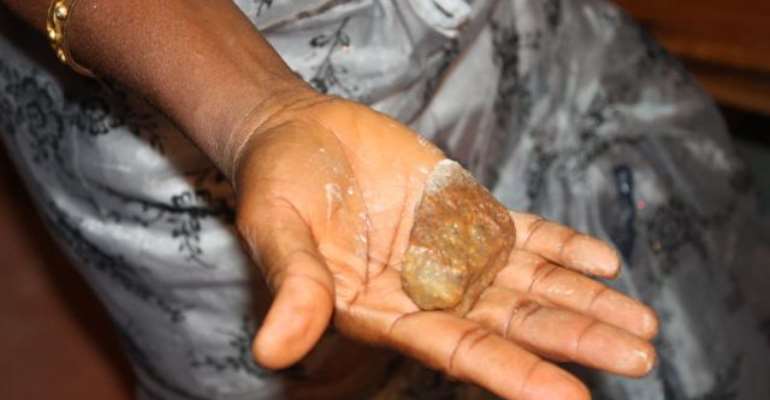 “Wonders” people say, “Shall never end”. We are living in a cruel world full of uncertainty, want and spiritual need. If you look around yourself, you will see men and women both young and old in desperate spiritual need. While a few of these people seek spiritual help from the right source, thousands if not millions, source help from negative powers under the pretext of tradition. Through this, some add more problems to their problem and carry a heavier lifetime burden. Some are lucky to come back to light while so many of such people died in darkness! The Few ones that are lucky to come back to light are those who are lucky to meet with the true men of God.

During the Sunday Service of The Synagogue Church of All Nations, during the mass prayer Prophet T.B Joshua said a word of faith to the congregation was the prayer is going on “that God is ready to do every proper thing to make you believe that he is in our midst here” those who claim to have fibroid, low sperm count, sickness, disease, etc. l command them out in the name of Jesus! Give way in the name of Jesus.” That is how the prayer commenced.

The congregation and everyone in attendance were amazed when a woman named Mrs. Lovett Samuel delivered a stone! Yes, I mean a stone! She was asked to hit it with another rock by the man of God T.B Joshua yet it never broke. The woman was asked again to pick it up and squeeze it, yet it remained constant. Beyond doubt!

She further said that she had no child for the past three years and was always having stomach pains, feeling like something was moving inside her stomach, which the doctors had labelled as a fibroid but when it finally came to light, it was a very different specimen.

Then the question that was still going through many people's mind is: how did the stone get there? All these questions and many others relating to the stone are regarded as a spiritual matter, which ordinary men cannot comprehend or explain. They are beyond human comprehension. Even if the woman was operated in the hospital, that stone would still be invisible to the doctor.

The woman might have visited so many hospitals and herbal homes without a solution. But the Bible says, “With God all things are possible”. God was able to deliver the woman through his prophet T.B Joshua and he was still able to deliver many of such women yet to be discovered.

The 'man in the synagogue', Prophet T.B Joshua was able to do all these because God empowered and commissioned him to tread upon “serpents and scorpions”. Remember the Bible says, lf the son of man set you free, you are free indeed.”