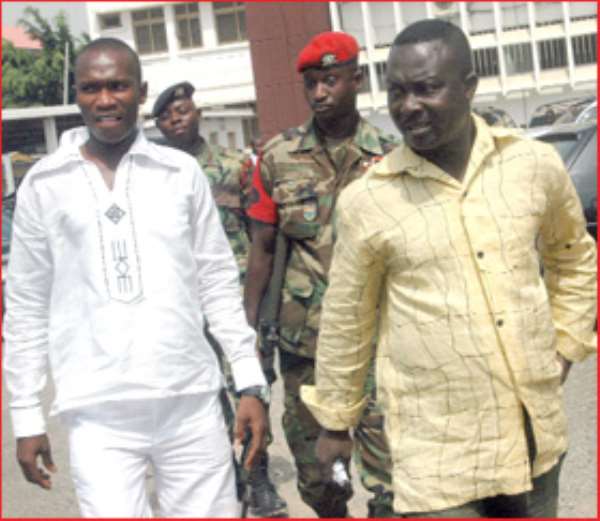 JUSTICE SENYO Dzamefe, the Accra Fast Track High Court judge presiding over the case of two soldiers held over the murder of Issah Mobilla, the former Northern Regional Chairman of the Convention People's Party (CPP), yesterday dismissed their application for the court to order the registrar to have the names of the jurors who would be empanelled to hear the case.

Giving reasons for his decision, the trial judge noted that even though they had good reasons for wanting to know about the would-be jurors so as to exercise some legitimate concerns on whether or not they might have an interest in the case, there is the need to protect the jurors from intimidation.

According to the judge, since the jurors are not sworn-in there is no law which gives the accused persons, Cpls Yaw Appiah and Modzaka Eric, any right to information about them before they are empanelled.

He said that seeing as there is a selection process it would be difficult to determine which jurors might be hearing the case, and it would be unfair to jurors who may not be empanelled to have their personal details made available to the accused persons.

Explaining further, the judge said although he understood the concerns of the soldiers that once the jurors are empanelled it would not be possible to ask for an adjournment to investigate their backgrounds and raise concerns about the likelihood of them being biased, granting them that application may expose the jurors to threats, among others.

The judge, who noted that there has been no ruling on such a case for him to rely on, said he would refuse to grant the application the balance of convenience and dismissed it.

The judge was supposed to give a ruling on whether or not the jury members should be sequestered once empanelled, but said the ruling was not yet ready. The case has been adjourned to January 14, 2009.

The prosecuting attorney, Penelop Mamata, on the last hearing date moved the motion to have the jury sequestered because of the media publicity and growing tension surrounding the case.

She told the court that the trial, which started in Tamale, “generated so much tension and affected security in the area”, leading to the transfer of the case to Accra.

According to her, there is fear for the safety of the jurors as they may be affected by the tension as well as media hype and controversy the case has generated.

Furthermore, she said it is “important to keep the jurors sequestered in order to shield from speculation and comment”, adding that they did not want the minds of jurors to be affected in the course of the trial as the case has led to a lot of media speculation.

Thadeus Sory, counsel for the accused persons, in responding to the application, said the fears of the state had no legal foundation, and noted that there is no rule or procedure in the law which warranted such an application.

He observed that wherever the jurors will be staying there is the likelihood they will watch television, listen to the radio and even read newspapers, adding that their concern is premature.

Counsel said if anything the defence counsel should have the right to complain about the media hype surrounding the case as some reporters have already given the case a media trial.

He continued that the state has made no complaint about any media reportage on the case in court so he was surprised that it was the prosecuting attorney who was concerned about media speculation.