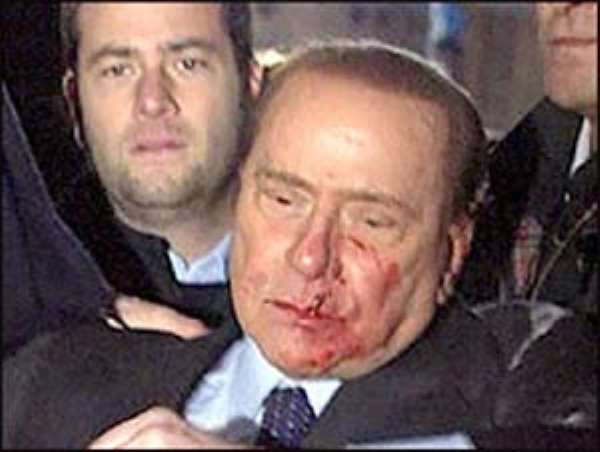 Italian Prime Minister will remain in the hospital at least "another 36 hours," his doctor, Alberto Zangrillo, said Monday, following an attack that broke his teeth and fractured his nose.

The man accused of hitting the controversial prime minister in the face with a replica of Milan's cathedral was charged with grievous bodily harm and held overnight, Milan police said.

Massimo Tartaglia was kept in Milan's San Vittore prison, authorities said. Under Italian law, police can hold him for up to 48 hours without a judge's order.

Anti-terrorist prosecutor Armanda Spataro has been assigned to investigate the assault, police said.

The suspect has a history of mental illness, according to Milan police. The suspect's father said he had never committed a violent act before, Italian media reported.

Berlusconi, a conservative media mogul-turned-politician, has been dogged by allegations of corruption and is the middle of a messy divorce from his second wife. He was in Milan, his hometown and political base, to stump for a local political ally, and blamed his legal woes on his political opponents during the rally.

Milan police said Berlusconi's attacker hit him with a small metal souvenir replica of the Doumo di Milano, the city's central cathedral, but it was not immediately clear whether the man swung at the prime minister with the object in his hand or threw it at him.

Defense Minister Ignazio La Russa told the Italian newspaper Corriere della Sera that Berlusconi continued to shake hands with supporters for "a couple of minutes" after being hit.

"He remained calm and leaned out the window as he was being driven to the hospital and waved to the crowd," La Russa said.

Buonaiuti said there was "a lot of confusion" surrounding the assault, but he put some of the blame on Berlusconi's critics.

"What I can tell you is that there has been such a buildup of hatred toward the premier, and this is not good," Buonaiuti said.

"This campaign of hatred has been building quite rapidly recently, and I am not surprised that what happened tonight took place."

Milan police said the man being questioned in connection with the assault was a "mentally unstable" man in his early 40s who had been undergoing psychological treatment for some time. The man, Tartaglia, is the only person arrested and is believed to have acted alone, they said. CNN