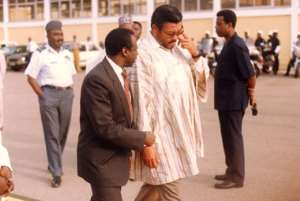 Former President Rawlings left Accra on Wednesday for Abuja to attend a meeting with the Nigerian Leader, Olushegun Obasanjo. Former Nigerian Heads of State, General Abubakar Abdul Salami and General Ibrahim Babangida would attend the two-day meeting, which is at the invitation of the Nigerian Leader. Speaking to the press at the Airport, the Special Aide and Director of Public Affairs at the Office of Former President Rawlings, Mr. Victor Smith said the meeting is likely to centre on the political development in Ghana and the Sub-Region. He was accompanied by Mr. Ekow Spio Garbrah and Ibrahim Adams all former Ministers in the National Democratic Congress government. Meanwhile, as part of preparations towards the holding of the Special National Delegates Congress for the election of the NDC Flagbearer for the 2004 Presidential elections, the National Executive Committee (NEC) of the Party has directed as follows: That no organ, institution or structure of the Party shall issue any public or Press statement in support of any contestant before and during the National Delegate Congress. For the avoidance of doubt, no Party Executive member at any level of the party shall issue any public or Press statements or make public pronouncements which may have the effect of committing the support of his or her institution, organ or structures of the Party to any contestant. A statement issued on Wednesday and signed by the Deputy General Secretary of the NDC, Baba Jamal said all Party members must take note of this directive and ensure a smooth run-up to the Special National Delegates Congress.