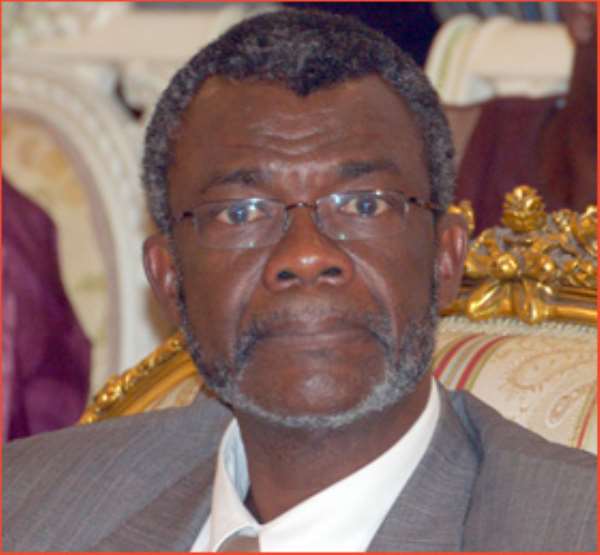 Documents available to DAILY GUIDE indicate that the Presidency has apparently engaged in profligate expenditure of public funds, overshooting its budget to the tune of ¢43 billion or GH¢4,310,777 in just nine months, for the comfort of Castle staffers.

The Office of the President was allocated an amount of ¢66 billion or GH¢6,617,043 for the whole year, but by the ninth month, over ¢109 billion or GH¢10,927,820 had been blown mostly on travels and workshops, contrary to the President's austerity proclamation.

The colossal amount constitutes over-spending by the Office of the President over and above what has been approved for the Presidency in the 2009 budget.

This expenditure is occurring at a time that even meager allowances of poorly paid hard-working teachers have been drastically slashed by the ruling National Democratic Congress (NDC).

This apparent reckless spending, on the part of government, was brought to light through a document comprising expenditure returns for the period January to September 2009, prepared by the Office of Government Machinery (OGM), which has been presented to the Finance Committee of Parliament.

DAILY GUIDE has learnt that the over expenditure of ¢43bn has been explained to be on 'Service Activity Expenses', comprising training and conference cost, travel and transport (T&T), and special services.

DAILY GUIDE has further learnt that the Finance Committee of Parliament, which has the oversight responsibility of the Executive and 'guardians' of public purse, has strongly frowned on the extravagant expenditure at the Presidency and therefore asked the Deputy Chief of Staff, Alex Segbefia, to appear before the Committee to justify the spending before the 2010 budget estimates are approved.

The document, a copy of which is in the possession of DAILY GUIDE, also indicates that on the contrary, the Vice-President's Secretariat, General Administration and Press Secretariat among others all operated within their budgets.

Speaking to DAILY GUIDE, a number of MPs whose gratuity or ex-gratia was reduced as part of austere measures by President Mills, were enraged by the reckless expenditure by the Castle, describing the conduct of the Presidency as a betrayal of trust and failure to keep faith with its own policy of cutting cost at all Ministries, Departments and Agencies (MDAs).

The extravagant expenditure by the Office of the President is coming on the heels of an exposure that the governing NDC has blown a whopping amount of ¢56 billion or GH¢5,606,176.11 on the comfort of Ministers of State through the renovation of bungalows.

It was discovered that as part of the expenditure, the Atta Mills Administration spent ¢8.58 billion on the renovation and furnishing of seven ministerial bungalows, with an average cost per bungalow of ¢1.2 billion or GH¢122,581.45.

The startling figures which were contained in a written answer by the Ministry of Water Resources, Works and Housing to a question raised by the Member of Parliament (MP) for Bimbilla, Dominic Nitiwul, a copy of which DAILY GUIDE sighted, also revealed that government spent ¢41.1 billion or GH¢4,110,396.74 on 57 ministerial bungalows in Accra.

Government's attempt to water-down the effect of the spending spree has been condemned by many Ghanaians who believe the Mills Administration is over indulging in what the ruling NDC founder, former President Jerry John Rawlings, has described as “reckless dissipation” of public funds by “greedy bastards”.

It would be recalled that just at the beginning of President Mills' 11-month-old presidency, the NDC Transition Team blew a staggering ¢1.3 billion on tea, during its sittings in only one month, at a time Ghanaians were being told to tighten their belts.

There were also reports of government lavishly spending tax payers' money to airlift cronies considered to be highly challenged in football matters to CAF and FIFA events to serve as independent observers and advisers.