A president under siege? 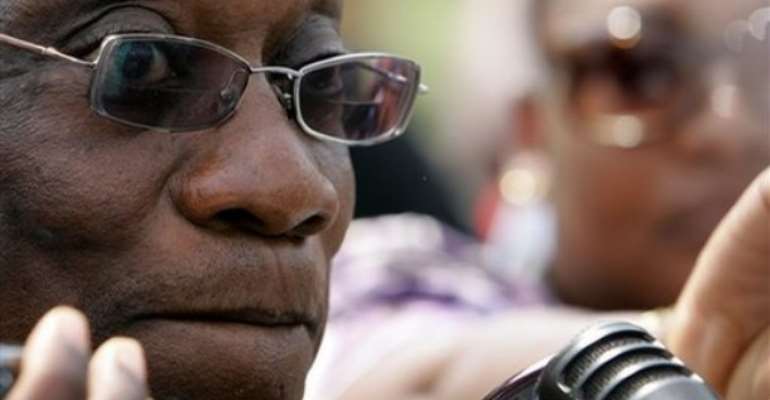 A president under siege?

President Mills is under siege. No doubt about that. He has become such an easy target that an increasing number of people are baying to take a hit at him. What is most intriguing is that the heaviest hitters are people within his own party. The opposition can take a vacation.

Just last week, it was the majority leader in parliament, Alban Bagbin. He said the president, who likes to portray himself as a humble sheep, has surrounded himself with aides and confidantes who behave like foxes, hyenas and lions. These people, according to Mr. Bagbin, tend to intimidate and harass anyone who tries to offer some useful counsel to the president.

Days before Mr. Bagbin's comment, the man who transformed the then Prof. Mill from a taxman to a politician, Jerry John Rawlings, and a group of constituency chairmen of the ruling party were expressing indignation at how the president had been conducting himself in office.

Mr. Rawlings believes strongly that his protégé has employed incompetent 'bastards' who have taken advantage of their proximity to power to satisfy their selfish interests.

The NDC constituency chairmen, on the other hand, are peeved that the president has surrounded himself with what they describe as a brick wall that has rendered him impervious to (wise) counsel from anywhere beyond his Castle.

Way before the constituency chairmen, Rawlings and Alban Bagbin, there was a certain Spio-Garbrah who was bold (some say silly) enough to tell the president that his governing team is made up mostly of a bunch of incompetent losers who do not even qualify to sit on the substitutes' bench.

All this must be giving the president a variety of migraines. It must feel like he's being boxed into a corner by his own people and he should be justifiably frustrated. But as if all that wasn't enough, the president is getting more hits this week – this time from some key MPs, apparently following in the example of the majority leader.

Moses Asaga (MP, Nabdam) doesn't understand why he, a leading member of the ruling party, doesn't get access to crucial information on oil exploration; Alfred Agbesi (Ashaiman) is peeved that no attempt has been made to fulfil a promise to provide legislators with office accommodation and Michael Teye Nyaunu (MP, Lower Manya Krobo) thinks the economic policies drawn up for next year, cannot be met because the government hasn't shown any extraordinary desire to achieve. They all blame the president.

With such heavy critics from within his own party, the president might need a little more than his regular dose of paracetamol or codeine. But it's important for him to maintain his cool. The manner he deals with the discontent in his party will be a very good test of his worth as a leader.

It is important for the president to deal with the avalanche of criticisms decisively and intelligently without panicking. That directive for appointees to grant audience to NDC faithful was a panic measure. It's very hard to believe that it came from the president. A politically savvy leader will not tell his press secretary to tell Ghanaians that those with ruling party membership cards will get easier access to his appointees. It is the absence of this political shrewdness that is causing all of these headaches for the president.

In his bid to show that he has his own solid pair of balls, the president has so alienated his political sponsor, Jerry Rawlings, that the former president's allies are wont to see Mills as an enemy. It's good for the president to assert himself. But alienating people is not the best way to express assertiveness. The majority leader, for example, feels alienated. And he's the guy who is supposed to be pursuing the president's legislative agenda in parliament. The president should find a way to work with him without the trappings of political patronage.

On the flipside, however, the president ought to make it clear to his party faithful that he is not a president for only NDC supporters. He is the president of Ghana and he should snub those who encourage him to act and think like a partisan. If there are jobs to be created, they will be created for Ghanaians – not just NDC supporters. If there are development projects to undertake, they will be for Ghanaians – not only supporters of the NDC. The president should think Ghana and those who tell him to think about the party and its so-called foot soldiers (what do they do anyway?) should be told in the crudest language to go to hell. Therefore, the presidential directive – if the Castle press secretary wasn't passing off his opinion as executive fiat – for NDC faithful to be granted access should be immediately withdrawn. It was a mistake.

The president also needs to listen and work with the advice of those who criticise him for being too slow. Indecision is not the mark of a good leader. His own remarks that he has a four-year mandate and so Ghanaians should wait and judge him at the end of that period portray him as a leader without a sense of urgency. His close aides can live with the fact that he is “like that” and he “takes his time” to do things. Ghanaians cannot accept that. So if people from within his party are complaining that things are moving too slowly, the president must take heed and start running – as he promised in his sessional address. Any limbs he broke when he hit the ground should have healed well enough for him to start trotting – at the very least. As things stand now, it doesn't seem like he's in the mood for a sprint – for that's what a presidential term is. And that is a problem.

Finally, president should realise that a lot of the punches that are being thrown at him are actually meant for some of the people he's working with. He knows as well as a lot of Ghanaians do that some of his appointees are simply not up to the task and he needs to get rid of them. But out of sheer stubbornness and a misguided attempt to prove that he knows what he's doing, President Mills is sticking to his guns. If he wants to get things done and fast – so that he wins a second term in office – he will need to quickly drop some of his squad members and bring in some fresh limbs and brains.

If he gets rid of the hyenas who intimidate the likes of Alban Bagbin, a lot within the party will be more than happy to have their voices heard, offering constructive criticism that will help maintain party cohesion and help him pursue his agenda of building “a better Ghana”. If he gets rid of the square pegs in round holes and bring in those who are not coming in to learn on the job with steep learning curves, manifesto promises will be fulfilled within the shortest possible time and the Ghanaian electorate will be more than happy to consider him for a second term.

If the president, however, insists on doing this his own (slow) way – moving 'nyaaa' like he's been doing since January – then he should continue dismissing his critics as annoying spoilers. He will end up being the first one-term president under the fourth republic. If that happens the NDC will end up where it was about a year ago – in opposition. And that is a terrible place to be. If Mills sends the NDC there once again, even his closest aides who are throwing their weight about today, will never forgive him.

You can visit Ato here.