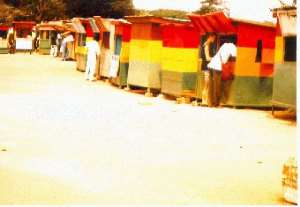 "One, Two, Three…. Ninety". Eager eyes as sharp as those of a hawk watched as the balls bearing the ninety lotto numbers were put into the machine one by one until the last number, ninety, known in lotto circles as the 'Old Man' was put in.

The lotto machine; that machine which has brought so much havoc to many homes and joy to a few ones does not recognise anybody, neither the rich nor poor, fat nor thin, tall nor short, male nor female, young nor old, professor nor student. The crowd, as usual, was thick. Several millions watched the proceedings on television from the comfort of their homes.

As the numbers kept turning in the lotto 'drum' many silent prayers directed to God, Allah, the ancestors, gods, etc, depending on one's faith were said by the numerous lotto fans watching the proceedings. Whether these prayers are heard and answered or not is known only after the fifth number comes out of the lotto machine.

Kofi Asante was one of those in the crowd at the offices of the Department of National Lottories (DNL) in Accra to watch the draw live. He had become a lotto addict ever since he won his first lotto several years ago.

While walking home after closing from work one Friday evening, Kofi saw a piece of paper by the road side. He wished it were a five thousand cedi note. He bent down and picked the paper. He was disappointed. It was a lotto ticket. The 'owner' had staked 3-30 for one thousand cedis the previous week. Since he was not a lotto fan or staker, Kofi did not know whether it was a winning or losing ticket. All the same, he took the ticket home.

The next day, he took the ticket to a lotto kiosk to find out if the numbers on the ticket had dropped the previous week. He was told the numbers rather dropped among the machine numbers. He politely asked the lotto receiver to stake the number for him for five hundred cedis. To his surprise and joy, 3 – 30 dropped neat like manna from heaven that evening. His joy knew no bounds. Unfortunately, this coincidence has dragged him into lotto; gambling.

Kofi started buying lotto papers every weekend. Within a short period of time, he had become an expert in the game. He knew the bonanzas, string keys, counterparts and shadows of all the ninety numbers. His friends affectionately called him the "Lotto Watchman" a name he has become so proud of that he boasts of winning a heavy amount one day to enable him drop his watchman clothes to enter into business. Regrettably, however, lotto has brought so much havoc to his family.

Kofi applied for a two-million cedi loan from his bankers which he hoped to give to his wife for a trading business. Meanwhile he intensified his research into the game and by Wednesday, he had confirmed 1 – 90 as his "two direct"

On Thursday, he had his loan paid to him. By sheer coincidence, a man who calls himself "Lotto Professor Azigiza" came to their work place. He was directed to "Lotto Watchman" The Lotto Professor, using two different lotto plans, proved 1–90 as two sure for the week. This, more than anything else, gave Kofi Asante the urge to go all out with the pair, which he described as the "excellent pair" he had ever seen in his lotto life.

That fateful Saturday, he had travelled from Obuasi to Accra to witness the lotto draw "filifili". After a few hours waiting , the time for the draw finally arrived.

Tension in the compound of the DNL was high. A few people shouted what they thought would be the first number. To Kofi Asante, it would be "Single 1". He wasn't sure of the position of "Old man 90", but by hook or by crook, 1-90 would not fail him. He had put 1.5 million cedis out of the two million cedis loan he had taken from the bank on this pair. He was sure of "harvesting" not less than three hundred million cedis from the Department of National Lottories. He had carefully kept the tickets away from his wife and children's view. The tickets were under lock and key in his suitcase.

A gentleman walked briskly to the lotto machine and pressed the button. One lotto ball rolled out majestically like a king arriving at a durbar ground . What number did it bear? An official of DNL picked the ball and showed the number to the milling and anxious lotto fans. It was "Single 1" Kofi jumped into the air. He was hopeful of 90 also dropping to enable him become a millionaire and leave the security-man job he was doing at the Agave Garments Company Limited ( AGC) at Obuasi. He will then become a businessman and educate his children in reputable preparatory schools.

A confident looking well dressed lady smartly walked to the unpredictable lotto machine to press the button for the second number. There were shouts of "Beijing" Beijing" . Yes, this lotto business has caught up with the females as well, some probably using housekeeping money for lotto. Another lotto ball smartly rolled out of the machine and the number was "Single 2. Tension began to rise with Single 1 and 2 dropping at first and second positions.

People's minds were thrown into a state of uneasiness. It was time for the third number. A boy of about sixteen years courageously walked to the lotto machine. "Hey, small boy, you too dey stake lotto?", shouted somebody from the crowd amidst laughter from the teeming crowd. It was a sort of relief from the throbbing hearts of lotto fans after the 'wicked' machine had released 1 and 2. Out came the third ball bearing single 3.

Insults and curses were hurled at the boy by a lot of people. People's blood pressure began to rise fast, "Hurray' shouted a lady. " I have got single 1 and 3" she confirmed. Eyes turned to her direction, as she waved ten five-thousand cedi tickets in the air. Kofi Asante was deep in thought. He began to sweat profusely, Despite that, he still believed 'old-man 90" will finally drop among the last two. He was definitely sure of that.

A man believed to be in his 70s and with a walking stick, walked to the lotto machine. "Akokra" called out a lady in the front row. While another person shouted “Amegadedi" from the back , a third person shouted "Bulagen"

He feebly put his fore finger on the button and pressed it,. Kofi Asante was hoping that the elder man going to press the button would be a sing of "good hope" for 'old-man 90" to drop to fulfil his dream and vision. The number turned out to be 19.

The four low numbers released by the lotto drum was a killer to many lotto fans. Those who had none of these four numbers on their tickets began to feel the pinch of having lost the battle and having to wait for another full week. For Kofi, the fifth number holds a thin line between life and death. " How was he going to cope with life with a reduced salary as a result of the loan if he does not win? " was the question that flashed through his mind. He decided to go and press the button for 90 to drop.

Kofi briskly walked to the machine. His shirt was soaked with sweat. With trembling fingers, he pressed the button and shouted "Ninety" like magicians normally do. Before the DNL official could announce the number on the ball, Kofi had collapsed onto the ground. He had already seen the number on the ball. It was single 9.