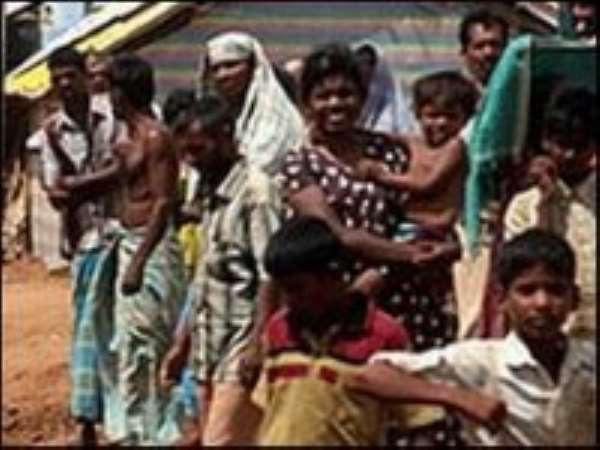 The general is charge of Menik Farm, the biggest camp, told the BBC people were free to leave - after giving their details so they could be monitored.

Sri Lanka has drawn strong international criticism for holding people there against their will.

They were set up for people fleeing the war zone during the government's final offensive against the Liberation Tigers of Tamil Eelam (LTTE).

The government announced 10 days ago that the camps would be opened up.

Maj Gen Kamal Gunaratne, who runs the Menik Farm camp, told the BBC that he expected a huge rush of people wanting to leave, but things were going smoothly and the mood was good.

Gen Gunaratne said people leaving on Tuesday had to return and that anyone trying to leave permanently would be "tracked down".

Many people doing aid work in these camps have felt ambivalent about giving assistance, says the BBC Charles Haviland in Colombo. Some see them as "open prisons".

The government says that is all changing. It says there will not be limits on how long they can stay away.

Our correspondent says that with northern Sri Lanka devastated and mined, some of the displaced will want to stay on in the camps for now.

However those who want to escape will not find it easy to do so, owing to heavy security presence in the region, our correspondent adds.

The government, which faces elections in January, has in the past month stepped up the formal process of returning people to the villages and the numbers living in the camps have halved.

The government says all the camps will be shut down by the end of January 2010.