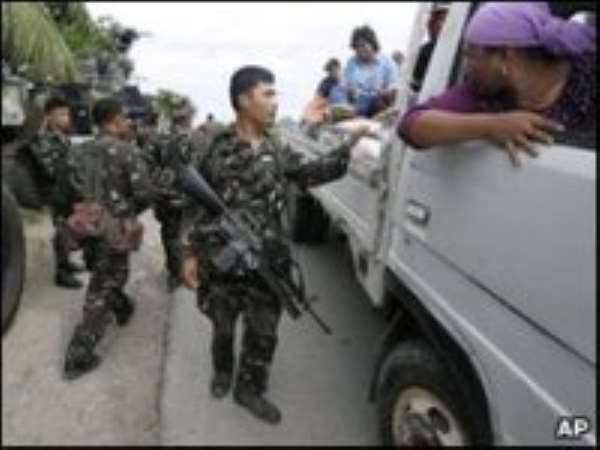 The death toll from a politically motivated attack in the Philippines has now risen to 57, after 11 more bodies were recovered on Wednesday.

President Gloria Arroyo has declared a national day of mourning, and promised the gunmen would not escape justice.

The victims were killed on Monday, as they travelled to file nomination papers for the forthcoming elections.

Local politician Ismael Mangudadatu has accused a clan said to be allied to Mrs Arroyo of being behind the attack.

Mr Mangudadatu's wife and at least 13 journalists were among the dead.

On Tuesday the government declared a state of emergency in two provinces on the island of Mindanao to allow police to search for the gunmen.

"It was really planned because they had already dug a huge hole [for the bodies]," he said, adding he had spoken to witnesses of the attack.

Among the dead were Mr Mangudadatu's wife, his two sisters and several key supporters, as well as at least 13 journalists who were travelling with them to witness his registration as an election candidate.

It is "the largest single massacre of journalists ever", according to the Paris-based group Reporters Without Borders.

Human Rights Watch has expressed concern the central government's close relationship with the Ampatuan clan would hinder an impartial investigation.

But President Arroyo promised justice would be served.

"This is not a simple feud between opposing clans. This is a supreme act of inhumanity that is a blight on our nation," presidential spokesman Cerge Remonde told a local TV network.

"The president is very clear that those people responsible, regardless of who they are, should be brought before the bar of justice."

Analysts say the Ampatuans have effectively been in charge of the restive province of Maguindanao for decades.

Andal Ampatuan Senior has served in the Philippines Congress and won the governorship of Maguindanao unopposed for several terms.

His son, Andal Ampatuan Jr, was reportedly planning a similarly unopposed run to replace his father, but then Ismael Mangudadatu decided to run as well.

At least three of Ampatuan's other sons are town mayors and most of them have their own private gunmen to safeguard their security.