NDC Mends Cracks - Ahead Of Party's National Congress In January 2010 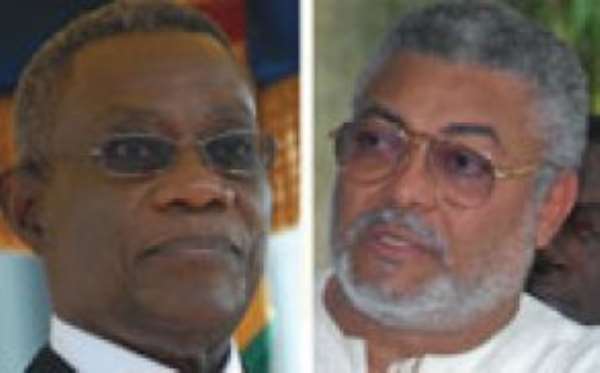 The National Democratic Congress (NDC) yesterday moved to heal the perceived cracks within the party before the election of National Executive Committee (NEC) during its national congress in Tamale from January 15 to 17, 2010.

In recent times, internal party cohesion appears threatened by comments by leading members of the party, including its founder, former President J.J. Rawlings; the Majority Leader, Mr Alban Sumana Bagbin, and Dr Ekwow Spio-Garbrah, all of whom expressed concern over President Mills’s style of governance, as well as the widening gap between the government and the foot soldiers of the party.

At a press conference to roll out the party’s road map towards the January congress, its General Secretary, Mr Johnson Asiedu-Nketiah, played down the internal wrangling and described it as healthy for internal democracy.

According to him, every member of the NDC was free to express his or her views on any issue concerning the party from “space, outside Ghana or in the submarine”.

“But such expressions should not offend the party’s rules and regulations because such regulations will be activated to deal with people when they (the regulations) are offended,” he added.

He took a swipe at some of the leading members of the party, especially constituency chairmen in the Greater Accra Region, whom he said had neglected their role in organising the party’s structures but had taken interest in marshalling themselves to blame the government.

“Instead of spending their time to organise branch and constituency elections leading to the regional conference for the party to reposition itself well, they are spending time blaming the government,” the general secretary added.

Some constituency executives in the Greater Accra Region recently marched to the offices of former President Rawlings and Mr Bagbin to complain about the failure of the government to address their needs after they had worked hard for the party to annex power.

To deal with the wrangling and ensure that the NDC went to the forthcoming national delegates congress in unity and with focus, Mr Asiedu-Nketiah said it had developed appropriate guidelines that had taken the views of all members into consideration.

In the guidelines, he said, Ministers of State, Members of Parliament, Ambassadors, district chief executives (DCEs) and members of the Council of State were barred from contesting any national executive positions.

Regarding the timetable for the congress, he announced that from December 1, 2009 any member of the party could publicly declare his or her candidature and start campaigning.

In addition, all regional elections must be completed by December 20, 2009, to be followed by the National Youth Congress and the National Women’s Congress in Sunyani and Winneba, respectively.

Both congresses will start from December 8 and end on December 9, 2009. Filing fees for aspirants for various positions are:

The general-secretary said the NDC being a democratic political party with social democracy as its philosophy, members were at liberty, within the confines of the party’s constitution and with decorum, to express their views on all matters they felt passionate about.

He said its records indicated that so far 157 constituency elections had been held nation-wide, leaving 73 to be completed.

With this, Greater Accra remained the greatest culprit because it had held none of its 27 constituency elections and over 1,000 branch elections, he added.

Mr Asiedu-Nketiah said it was incumbent on members of the party in the Greater Accra Region to hold their leading members who had been complaining about neglect responsible for failing to carry out their responsibility of holding elections after eight months.

Meanwhile, a New Patriotic Party (NPP) heavyweight, Dr Nyaho Nyaho-Tamakloe, has waded into the apparent disquiet in the NDC, describing it as a national issue with dire consequences for the country’s democracy.

Addressing supporters of the NPP at a mini rally at Akwei House in Accra Central, Dr Nyaho-Tamakloe said although the issue appeared to be between the Mills administration, on one hand, and members of the NDC, including former President Rawlings, on the other, it could spark a national crisis if it were not properly handled.

He referred to a recent commentary by an NDC fan who said if care was not taken, President Mills, being a principled person, would resign, and that would be followed by his vice, Mr John Mahama.

That, Dr Nyaho-Tamakloe explained, could offer some nation wreckers the opportunity to execute their adventure to destabilise the peace and stability of the nation.