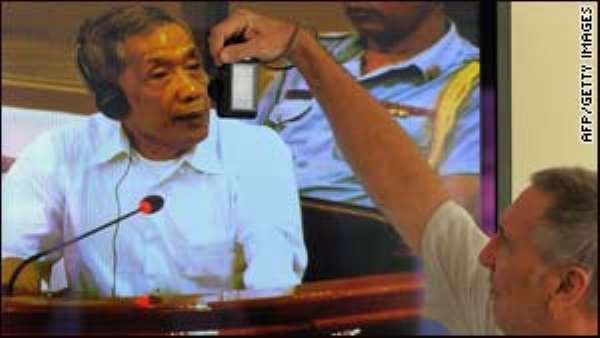 Prosecutors in the trial of a former Khmer Rouge prison chief asked a U.N.-backed Cambodian court Wednesday to sentence the man to 40 years in prison for his role in the torture and deaths of thousands.

Kaing Guek Eav, known as Duch, is being tried on charges that include war crimes, crimes against humanity and torture during the communist regime's rule from 1975 to 1979.

Soon after the prosecution spoke Wednesday, Duch got up and apologized to the victims' families and asked for their forgiveness -- something he has repeatedly done since he became a born-again Christian.

Duch said he was just an instrument, with no choice but to follow orders from a regime that was determined to destroy all of its enemies, said Lars Olsen, spokesman for the Extraordinary Chambers in the Courts of Cambodia.

Duch, 67, asked the court to consider his actions in the context of the time, saying the torture and killings were inevitable, Olsen said.

Prosecutors contended that Duch, a former school teacher, ran S-21 -- a prison that had been converted from a school.

Here, men, women and children were shackled to iron beds and tortured -- before they were beaten to death, prosecutors said.

Duch not just oversaw the torture and killing of more than 15,000 people -- but actively took part in some of them, prosecutors said.

Many of the victims were military officials or members of the Communist Party who were targeted for not going along with the philosophy of the ultra-Maoist Khmer Rouge movement. CNN

The movement swept to power in 1975. Three years, eight months and 20 days later, at least 1.7 million people -- nearly one-quarter of Cambodia's population -- were dead from execution, disease, starvation and overwork, according to the Documentation Center of Cambodia.

The non-profit organization has been at the forefront of recording the atrocities committed during the regime.

S-21 was one of 189 similar institutions across Cambodia. And Duch is the first former Khmer Rouge leader to stand trial.

Spectators, many of them survivors of the abuse, watched the proceedings from an auditorium separated from the courtroom by a large glass window to prevent revenge attacks.

Four other former leaders await trial before the tribunal, also accused of war crimes and crimes against humanity.

The tribunal, which is made up of Cambodian and international judges, does not have the power to impose the death penalty. CNN