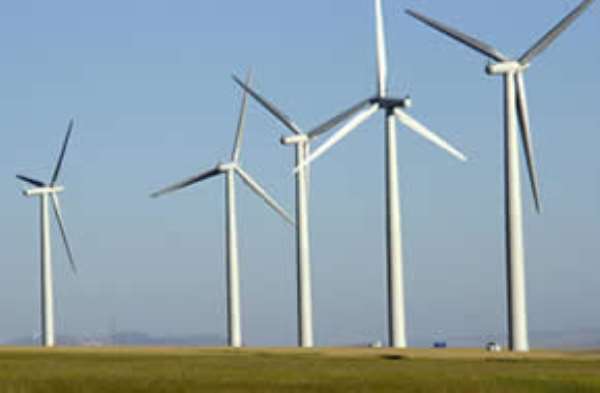 
As part of measures to boost power supply in the country, the Volta River Authority (VRA) has hinted of plans to establish a wind farm in Ada, Greater Accra region, that will add between 50 to 80 megawatts of electricity to the national grid.

Explaining Ghana's current energy profile, Amuna noted that the Akosombo dam generates 1020 megawatts while the generation from Kpong and Aboadze Thermal are 160 and 550 megawatts respectively.

According to Amuna, government saved $22 million through its energy conservation initiatives introduced since the last energy crisis the country witnessed.

Among the strategies employed to manage the crisis then was the implementation of the appliance energy efficiency programmed and the lighting retrofit project through which about six million CFLS were imported and used to replace the energy-consuming onion bulbs used in most households.

Based on the deployment of wind energy that occurred during the past three years, a 20 per cent annual wind capacity growth is expected until 2030, according to an expert in renewable energy resources.

The United States was the second largest installed capacity of wind power, after Germany until 2008, when it surpassed Germany with the American Wind Energy Association stating that the United States had 21,000 MW of wind energy capacity at the end of2oo8.

A wind farm is a group of wind turbines in the same location used for production of electric power. A wind farm may be located off-shore to take advantage of strong winds blowing over the surface of an ocean or lake.

According to Craig Murray, former British High Commissioner to Ghana, in an article on the future of Ghana as an oil-producing country, "Ghana has great potential for wind energy, solar energy and above all wave and ocean current energy. Major projects in these areas should be developed with oil revenue.”

These three countries supply around 95 percent of the 563 megawatts of total installed capacity on the black continent. The sector has already started paying up mostly because of demand from Europe, where countries are under pressure to reduce C02 emissions so they turn to different renewable energy sectors.