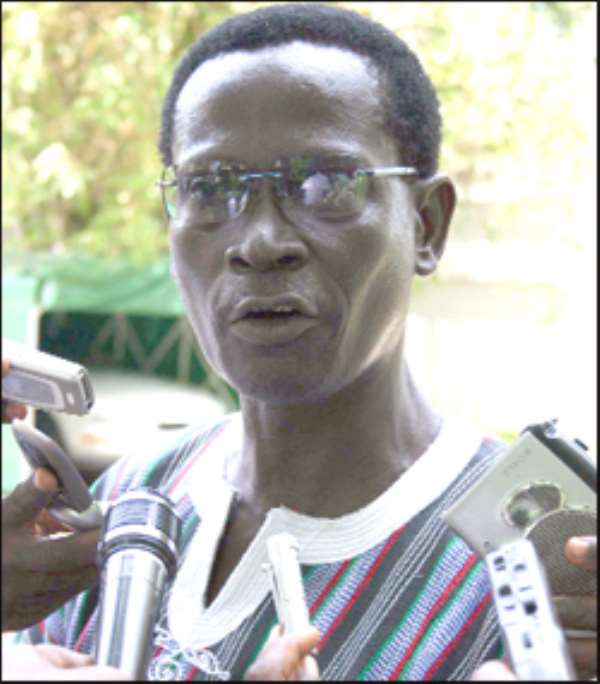 THE NATIONAL Democratic Congress (NDC) in the Northern Region is sitting on a time bomb as the party goes for its regional congress tomorrow to decide who chairs it for the next four years.

Even before the decision day reports of planned attacks on certain personalities in the various camps that have emerged.

Tension is gradually enveloping the entire party ahead of tomorrow's congress, with some delegates expressing fears of a possible clash and bloodbath, owing to previous attacks and counter-attacks on the contesting parties.

Even though about seven regional positions are up for grabs, concentration seems to be centered on the ultimate, the Regional Chairmanship, and the names making the rounds.

Prior to the filing of nominations, accusations, text wars and verbal assaults were reported among the contenders for the top position.

DAILY GUIDE checks at the regional secretariat of the party revealed that three persons, San Nasamu Asabigi, the current Vice Chairman, Alhaji Sumani Zakari, the incumbent Chairman, and Alhaji Ibrahim Mobila, a farmer, are seriously gunning to lead the party in the region.

The three are tipped to run a close race for the chairmanship, but DAILY GUIDE gathered that forces may be combined to ensure that the incumbent is not retained, as many blamed the party's woes and its recent negative reportage on his actions.

Investigations by DAILY GUIDE indicate that the three are gradually rounding up their regional tours to secure more votes from delegates.

The situation has further heightened tension in the party, coupled with the existence of bad blood among the rank and file of the party over pertinent issues many say could easily have been resolved within the party.

The crisis that hit the NDC, leading to attacks on personalities and groups has however left questions about how peaceful and incident-free the elections on November 22, 2009 will be.

New entrants to various ranks of the party confirmed to DAILY GUIDE that they were being pursued with threatening text messages from unknown persons, believed to be in the camps of their opponents, to either quit the race or face the consequence.

A few of them said this was not a healthy practice considering the fact that the party's congress was being conducted under the rudiments of democracy. They have since petitioned the Executive Committee (EC) of the party to intervene.

This, some observers say, is a recipe for disaster as their safety cannot be guaranteed on the day of the congress, which many have envisaged may turn bloody and give a very bad image to the party.

Meanwhile, Bukari Yahaya Alhassan, one of the contestants, has filed a writ at a Tamale High Court seeking an interim injunction restraining the party from holding the congress on the said date until certain grievances were addressed.

It was uncovered that more than 20 persons are contesting for the 7 regional positions in the party come Sunday.

Among them are Sofo Awudu, a.k.a Azorka, the leader of Azorka boys, for the position of Regional 1st Vice Chairman, together with Adam Mukaila Admond, a football administrator, regional minister and lecturer, and Alhaji Seidu Gilbert Iddi.

The post of the 2nd Regional Vice is being contested by Mr.  J.B. Mohammed, a former MP for Zabzugu, and Mr. Sule Alhassan, also a former DCE for Tolon, while the position of the General Secretary is being fought for by Alhaji Imoro Umar and Mohammed Aliu One Man.

The rest are Alhaji Abdulai Silimboma and Alhaji Ibrahim Libron for the Regional Organizer, whereas Tanko Rashid Computer, Hajia Abiba Chambers and Iddrisu Sedzro Kofi will lock horns for the Treasurer position.

By the close of nominations Alhaji Umar Farouk and B.Y. Alhassan had filed to contest as propagandist of the party.

The Regional Youth Organizer, Mohammed Amin Adam Abio, who confirmed the list of contestants to DAILY GUIDE, promised an incident-free congress, disclosing that enough security arrangements have been made.

He allayed the fears of delegates of any possible reprisal at the congress, saying all contestants have been educated on the code of conduct of the party and he was thus confident they would not breach them.

Taking the peaceful youth congress as a case study, he was optimistic the congress would end without any report of skirmishes.

But pieces of information picked by DAILY GUIDE from the ground indicate some supporters are arming themselves to launch attacks on the instructions of their leaders when the need arises.