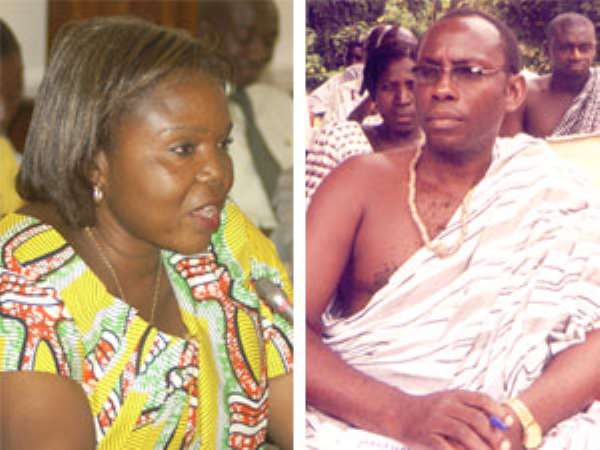 THE Ex-Speaker of Parliament, Mr. Ebenezer Begyina Sekyi Hughes, may not have been the only government official in the previous administration to have “emptied” his official residence after leaving office, as reports available to the paper indicate that a similar “property grabbing scandal” has hit a former District Chief Executive (DCE) in the Ashanti Region.

The Adansi South District Assembly is currently pursuing its former DCE, Mr. Francis K. Dorpenyoh for the return of items worth ¢48 milion cedis, which he was alleged to have taken away from his official residence when leaving office.

The ex-DCE is reported to have carted away household items, including a DSTV satellite dish, a set of living room furniture, mattresses and kitchen items belonging to the state, after the leaving office early this year.

Mr. Dorpenyoh was reported to have taken the items along, upon the advice of his church, under the 'superstitious' belief that if he did not take those items with him, it could be used to cast a spell on him.

Even though the former DCE, the paper gathered, initially agreed to pay back the quantified amount of the 'stolen' items, after being probed by the Bureau of National Investigations (BNI) and threatened with court action, he challenged the authenticity of the value of the items, claiming that the amount was too much.

Mr. Dorpenyoh later agreed to return the items intact, to avert being prosecuted in court, but fears he may expose himself to his “political enemies,” against the directives of his church.

He is reportedly playing hide and seek with the security agents and the District Assembly, as several attempts to retrieve the items have proven futile.

Mr. Dorpenyoh was dismissed by the then President J. A. Kufuor somewhere late November last year. just a month to the end of the administration, but did not leave his post and continued to stay in office when Prof. Mills directed that all DCEs should continue to act until new ones were appointed.

Reports gathered by The Chronicle indicated that the loss of the items was discovered when the Deputy Ashanti Regional Minister, Mrs. Enima Wilson, who is acting as District Chief Executive (DCE) due to failure on the part of the assembly to approve the President's nominee, visited the district last week to scrutinise the assembly's budget expenditure for the year.

In the course of his analysis, the Deputy Minister reportedly raised eyebrows about GH¢20,000 being money earmarked for the refurbishment and interior decoration of the DCE's residence, and questioned why such a colossal amount of money should be set aside for a project, which by her estimation, should not cost that much.

Much to the chagrin of the Deputy Minister, she discovered that amongst the expenditure were provisions made for the purchase of those items, and upon enquiry, was informed that the former DCE took them away.

The case of the missing items, The Chronicle gathered, was initially being handled by the local police at New Edubiase, but little attention was being given to it until the Deputy Minister made the discovery, and ordered for the retrieval of the items.

The Minister has meanwhile confirmed the incident in an interview with the paper.

The Obuasi Divisional Police Commander, Supt.Emmanuel Amissah, has also confirmed to the paper's correspondent in Obuasi, Albert Nana Asante that Mr. Dorpenyoh was being charged with taking away public property without authorisation, and also corroborated all the information available to the paper.

When the ex-DCE was contacted, he confirmed carting away the items, but has now agreed to return them.

He told the paper, in a telephone interview, that he was expected to have handed the items to the New Edubiase police last Tuesday, but had been directed to come to the Obuasi Municipal Police Command for questioning.

Asked why he took the items away, knowing very well it was state property, Mr. Dorpenyoh said the practice had been norm, and that he felt there was nothing wrong with it, but denied that it was upon the advice of his church.