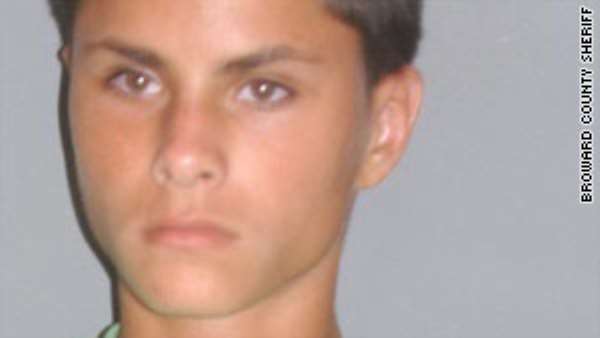 
Three teens accused of setting a 15-year-old friend on fire pleaded not guilty Thursday to charges of attempted murder, a public offender for one of the boys said.

Denver Jarvis and Matthew Bent, both 15, and Jesus Mendez, 16, are charged as adults with one count of attempted murder in the second degree in the October 12 attack in Deerfield Beach, Florida.

They were arraigned in Broward County Circuit Court before Judge Dale Cohen and are being held without bond.

Two other boys ages 13 and 15 have been charged as juveniles.

Prosecutors say Jarvis, Bent and Mendez were in a gang that poured alcohol over Michael Brewer, 15, then set him ablaze in a dispute over $40, a video game and a bicycle.

Brewer jumped into the swimming pool at his apartment complex to put out the flames, witnesses say.

Brewer suffered burns over 65 percent of his body. He's reported in guarded condition at the University of Miami's Jackson Memorial Hospital Burn Center, where he's been in a private room since the incident.

Gordon Weekes, the attorney for Bent, denounced the fact that the teens were charged as adults.

"It's been decided by society that a 15-year-old can't vote, can't join the armed forces and cannot buy alcohol, because society has recognized that children do not have the ability to appreciate the long-term consequences of their actions," he said.

"But they can treat them as adults in court, when we have very capable remedies for them in the juvenile justice system, which is geared toward rehabilitation," he said.

Weekes said he and the other two public defenders plan to make separate motions to the court asking that their clients be allowed to post bond.

Detectives say witnesses told them that Mendez used a lighter to set fire to Brewer after Jarvis poured alcohol over him. They said Matthew Bent encouraged the attack.

Authorities say Mendez admitted setting Brewer on fire, and that he made a "bad decision," according to an arrest transcript.
Detectives with the Broward County Sheriff's Office have been unable to interview Brewer. Until last week, he had been on a ventilator to keep him alive.

"We hope that we can maybe get a statement this week," said sheriff's spokesman Jim Leljedal.

"Detectives have been waiting for him to recover to the point where he's strong enough to give us a complete statement," he said.
Doctors say Brewer is improving but his condition is tenuous because of the severity of his burns and the possibility of infections. Most of his burns are on his back and buttocks; his face and hands were largely spared, doctors say.

"They still have to perform several operations on him for skin grafting, but his parents are with him all the time," said Lorraine Nelson, a hospital spokeswoman.

"I don't tell him what happened," Brewer's mother, Valerie, told CNN affiliate WFOR-TV. "I just tell him he's in the hospital and he's safe and he's getting better.

The next day, the group surrounded Brewer. The five boys called Brewer "a snitch" and set him on fire, witnesses said.

The Brewer family told WFOR that none of the families of the accused boys have tried to contact them, but it doesn't matter.

"We can't focus on it. They'll get theirs is all we can say. I don't focus on it," Michael Brewer's father, also named Michael, told WFOR.
If convicted they could face up to 30 years in prison.

A court-appointed psychologist who has examined two of the five boys told CNN they are competent to take part in legal proceedings and assist their attorney.

"I can describe both of them as being afraid, being fearful," said forensic psychologist Michael Brannon, who did not identify the boys.

"I can describe both of them as being tearful at various times during the interview, especially when talking about the specific incident which led to the injuries of the victim," he said.

Psychologists are often brought into cases involving teenagers and young adults to judge their mental capabilities and determine their competency to proceed. Psychologists also must evaluate whether the defendants can talk about what happened and communicate effectively with defense attorneys.

"I don't think they expected to have happened, what happened," Brannon said. "It's a horrible event that occurred, but this was not their conceptualization, in my opinion, of what was going to happen."