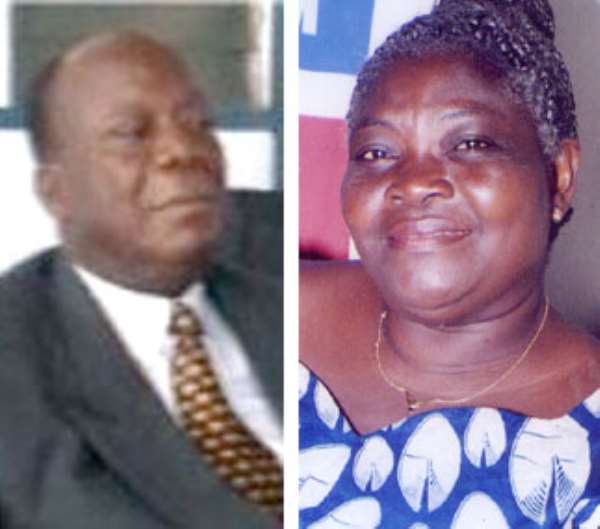 THE POLITICAL drama unfolded at Awutu Senya in the Central Region over the weekend, when New Patriotic Party (NPP) delegates attending the constituency delegates congress to elect new party executives, decided to follow the footsteps of their National Democratic Congress (NDC) counterparts, by hooting at a former national chairman of the party, Harona Esseku. The Grandpa's crime was that he had challenged the process for the compilation of the album for the constituency.

According to credible information, Mr. Harona Esseku, after the Central regional executives had ignored his call for proper things to be done in accordance with the party's constitution, went to the congress ground to present a letter written by Mrs. Agnes Okudzeto, the national officer in charge of the Central region, who was also demanding that the laid down procedures should be adhered to.

The Chronicle gathered that just as the former national chairman presented the papers to the executives, the Regional Organiser, Alhaji Bature, mounted the podium with the microphone, and charged the delegates to hoot at the founding father. The delegates from Senya, where Mr. Esseku hails, who were not happy with the humiliation of their father, followed him and boycotted the congress.

Mr. Esseku admitted in an interview with The Chronicle, that the delegates gave him ill-treatment, but stated, “it is part of political hazards. I am not worried at all about insults or whatever they have done. My point is that the directives must be followed.”

Meanwhile in a report dated November 17, this year, copied to the National Chairman, Mr. Peter Mac Manu, and signed by Mr. Esseku, chronicled the events of the Saturday's episode.

In the report, captioned, “Report on constituency elections allegedly held at Awutu-Senya on Saturday 14th November, 2009,” the ex-chairman had the following to say, which eventually confirmed the story.

“On Friday evening the 13th of November, when I got home, there was information that the elections will come on without fail the next day, the 14th of November. I got to the venue on Saturday morning, and truly, the elections were about to take place. I tried to give a copy of the letter written by Agnes Okudzeto to the Chairman of the Election Committee, Nana Ama Abrefi, but she refused to take it, and told me that she takes instructions from the National Chairman, Mr. Mac Manu, and not from Mrs. Okudzeto.

Alhaji Gibreel, the Central Regional Organiser, was there and told me he had been invited by Nana Ama Abrefi to help conduct the elections. When I asked him to take a letter to the Regional Chairman, he said he would deliver it after the elections were over,” he alleged.

He continued, “The Electoral Commission officer refused to read a copy of Mrs. Okudjeto`s letter, although he accepted copies. He told me that since he had already come to the venue, he would do his duty to ensure that the elections took place. In fact, he had been invited, not by the Elections Committee, but by the outgone constituency officers. The constituency Elections Committee, which was supposed to perform its duties independent of the Constituency Executive Committee, was not obeying the law. Alhaji Bature, the outgoing constituency organiser, was holding a microphone and shouting “Twoo Boi”.”

Esseku further noted, “At this call, a number of people started heckling me, while others surrounded my car for a purpose I couldn't fathom. At this point, I decided to leave the place. Over 90% of the delegates from Senya walked away in protest. In conclusion, the election in Awutu Senya was a farce, and must be declared null and void. Mrs. Okudjeto's letter must be obeyed. Several other errors must be corrected. The party cannot afford to allow this impudence to Mrs. Okudjeto and Mr. Harona Esseku to go without serious punishment. This is the time for all of us to help save our party from collapse. A fresh election for the Awutu-Senya Constituency Executive Officers is a must,” he requested.

The Chronicle has also sighted a letter written by Mrs. Okudzeto, national officer in charge of Central Region, which raised issues as far as the elections were concerned.

This was what she wrote in part to the Regional Chairman seeking that the right things should be done, “The album submitted to you on Tuesday 10th November, 2009, was not copied to the constituency and the headquarters of the party. Contestants have by this action been unable to reach the voters during their campaigns. The single album in circulation contains several errors.

“It is your obligation to ensure that FIVE DAYS mandatory notice be given before the elections. There is no notice to that effect. Although the Election Committee was inaugurated on Tuesday 10th November, 2009, the letters inviting the voters to assemble for the elections were written and dated Friday 6th November, 2009 by the outgoing constituency secretary, who is also responsible for distribution of the invitation letters yesterday and today for tomorrow's elections.”

She urged the Regional Chairman to strictly adhere to the rules governing the party, saying, “Please ensure that the above are all corrected, before a date is fixed for the elections.”

Despite the directives, the Central Regional executives rubbished it, and went ahead to conduct the elections.

It is the contention of Mr. Esseku, that the elections should be declared null and void.