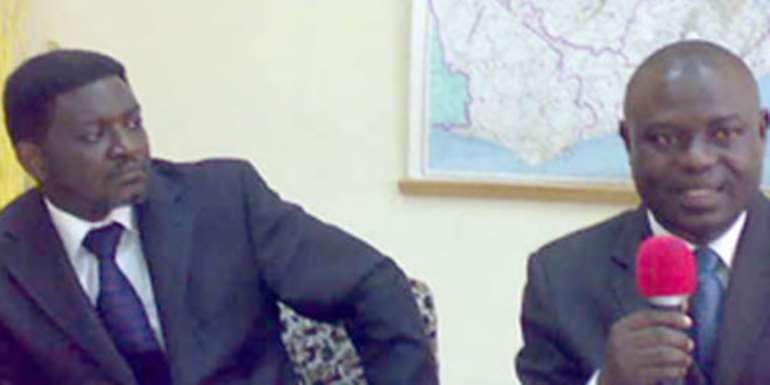 Lawyers and the leadership of the Word Miracle Church International (WMCI) yesterday tendered in documents to prove that they are the only and true owners of a parcel of land at Avenor, which resulted in a dispute that claimed two lives on Monday morning.

This was when the church invited a section of the media to their headquarters located at Dzorwulu in Accra yesterday, to show them proof of how they acquired the land through legal means.

Lawyer for the church and Accra-based legal practitioner, Adjei Lartey, who spoke on behalf of the church, produced a land certificate dated September 14, 2009, and signed by the Chief Registrar of Lands at the Land Title Registry, which gave the name of the owners of the 1.29 hectares (3.20 acre) of land situated at Avenor, as the WMCI.

He thus rubbished the claims and speculations making rounds in the media, as though the church had encroached on somebody's property, saying “that is totally false.”

“From the records available at the Land Title Registry to the Lands Commission, the Word

Miracle Church is the bonafide owner of that piece of land located at Avenor.”

This, according to him, was evident in the fact that the church conducted all the legal processes before going into the purchase of the land in the year 2004.

He could therefore not find any wisdom in claims that the Ahmadiyya Muslim Mission owns the land.

In spite of that, the leadership of the church says it is prepared to meet anybody who has a problem with the land, to discuss the issue, and resolve it. “Any contesting claimant should hold his peace. If he is not satisfied with the proceedings so far, the law court is available and assessable, he can go and state his case, and we will be ready to meet him.”

According to him, the land was sold to the Nkrumah circle branch of the WMCI, by the late John Kofi Appiah and his existing son, and then went ahead to follow all the legal processes to get a registered title from the Land Title Registry to cover the land.

Prior to the issuance of the land certificate, he noted that the Registrar of Lands caused a publication in the Ghanaian Times newspaper, in which he sought to notify the public of their intention to register the said land, as required by law.

Since then, he noted that no single individual or group of persons had issued a caveat body, or even raised an objection against the sale or purchase of the land, and therefore stressed, “The certificate which has been issued is an indivisible title, which inures to the benefit of the title holder, which is the Word Miracle Church International.”

Due to an earlier judgment in favour of the church, he noted that they sought an order for leave for execution and demolition of the structures on the land, which was granted by an Accra High Court.

This, according to him, enjoined the police to assist in the removal of the structures last week Wednesday.

In their quest to develop the land, Lawyer Adjei Lartey noted that the church has had a series of consultations with the chiefs and people of the area, the Assembly Member, and the Okaikoi sub-metro, in which they outlined their plans for the area, including an adoption and elevation of the Avenor Community School.

Based on this, he said, “We find it inconsistent and unacceptable for anybody to claim that the church has no land in the locality.”

Asked of the identities of those who went to the land on Monday, the lawyer responded that they were those who assisted the police when they were recovering the land, since according to him, “the police saw them, assisted them, and they cannot be termed as landguards.

“The church never engages landguards, because we are owners of the land, and it doesn't make sense if an owner of land will go and employ landguards on his own land,” he noted with emphasis.

The church however expressed regret at the incident which resulted in the loss of the lives of two individuals, describing it as unfortunate. They therefore expressed their heartfelt condolences to the deceased families for the loss.

Meanwhile, the church has indicated its preparedness to assist the families of the bereaved to find a resting place for those who lost their lives during Monday's incident.

The Ahmadiyya Muslim Mission has however sought to disassociate itself from the incident. A statement signed and issued in Accra yesterday, by its General Affairs Secretary, Alhaj Abdul Rahman Ennin, said, “the mission wishes to make it abundantly clear that it is not, and has not, been in litigation in court with any other religious body over the ownership of any parcel of land at Avenor.”

The Mission thus noted that it had not engaged landguards or any group of persons to fight in its interest. The statement however noted that the Mission owns plot number 165 in Avenor, by an indenture dated December 11, 1985, executed between itself and one Numo Ayitey Agbofu II (Gbese Mantse) as lessors, stressing that the latter issued the parcel of land covering an approximate area of 1.59 acres in the Avenor area.

It is thus not clear whether it is the same parcel land the two religious bodies are laying claim to.

Do The DNA Test For Rawlings And His alleged 52 Years Old Da...
11 minutes ago