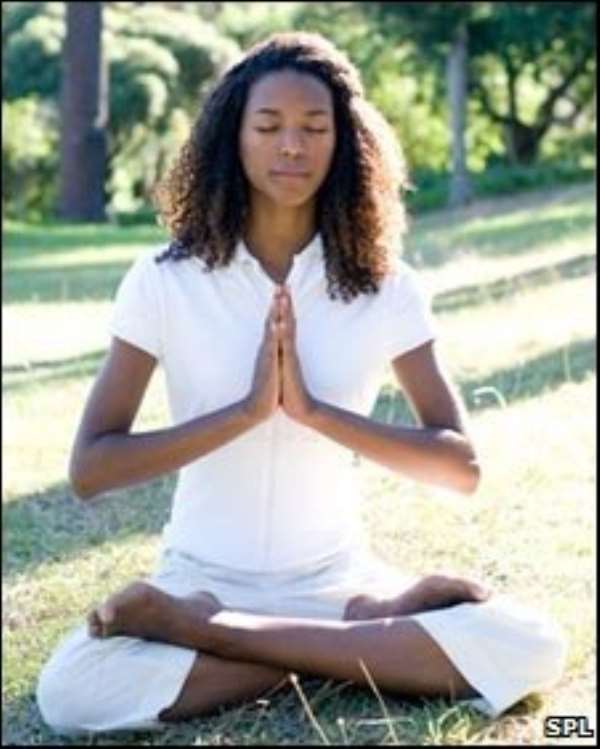 At a meeting of the American Heart Association they said they had randomly assigned 201 African Americans to meditate or to make lifestyle changes.

After nine years, the meditation group had a 47% reduction in deaths, heart attacks and strokes.

The research was carried out by the Medical College in Wisconsin with the Maharishi University in Iowa.

'Significant benefits'
The African American men and women had an average age of 59 years and a narrowing of the arteries in their hearts.

The meditation group practised for 20 minutes twice a day.

As well as the reductions in death, heart attacks and strokes in the meditating group, there was a clinically significant drop (5mm Hg) in blood pressure, and a significant reduction in psychological stress in some participants.

Robert Schneider, lead author and director of the Centre for Natural Medicine and Prevention at the Maharishi University in Iowa, said other studies had shown the benefits of Transcendental Meditation on blood pressure and stress, irrespective of ethnicity.

"This is the first controlled clinical trial to show that long-term practise of this particular stress reduction programme reduces the incidence of clinical cardiovascular events, that is heart attacks, strokes and mortality," he said.

Dr Schneider said that the effect of Transcendental Meditation in the trial was like adding a class of newly discovered drugs for the prevention of heart disease.

He said: "In this case, the new medications are derived from the body's own internal pharmacy stimulated by the Transcendental Meditation practice."

Ingrid Collins, a consultant educational psychologist at the London Medical Centre, said: "I'm not at all surprised that a change of behaviour like this can have enormous benefits both emotionally and physically.

"Physical and emotional energy is on a continuum and whatever happens to us physically can affect our emotions and vice versa."