4 robbers shot dead …Police in manhunt for two others 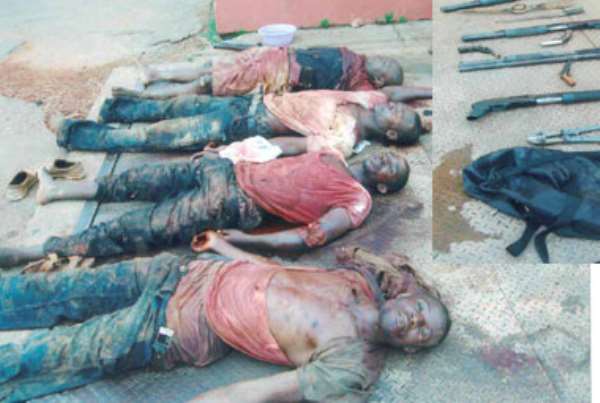 FATE ELUDED four out of six suspected armed robbers as they were shot and killed in a fierce gun battle with a team of police personnel last Friday night.

After embarking on a robbery expedition, in which they were alleged to have robbed their victims in three separate operations of various sums of monies and personal belongings, the robbers were overpowered by a police Buffalo team who acted upon a tip-off, killing four of them while two other accomplices are currently on the run.

The suspected robbers were alleged to have embarked on series of operations in three different suburbs, including Chirapatre Estate, Asokwa and Kokromoase near Santasi before being cross-fired by the team of security agents on that fateful night.

Two of the deceased, according to police source, were ex-convicts involved in series of criminal acts, while another one is alleged to be a close associate of another notorious armed robber, Ousman Gado, who was killed by the Police few months ago, in a similar operation.

Briefing the media on Saturday morning, the Ashanti Regional Police Commander, DCOP Patrick Timbillah, said the robbery mission started last Friday around 6 pm at Buokrom, where one of the suspected robbers snatched a KIA Pride taxi cab from its driver at gun point, after hiring the vehicle.

On his way, he was joined by two other accomplices, and after pushing the driver out of the vehicle, they allegedly tracked a Business woman, who had closed from her provision shop at Adum, to her residence at Chirapatre Estate.

Few meters to her house, the robbers reportedly rounded the woman, and one of them, who was wielding a locally manufactured gun, asked her to bring all her money and other belongings in her possession, but the woman told them she had no money on her because she had deposited all her daily sales in the bank.

But the suspected robber, who did not feel convinced about the answer given to him by the woman, shot his victim on the right shoulder, insisting that she brings out every amount of money on her.

In the course of the scuffle, a young brother of the victim came out from the house and realizing that her sister was in danger, decided to attack the other robber but in the process, one of the robbers in the taxi cab quickly seized the ignition key of a Nissan Pathfinder with registration number GR 9009V which was being used by the woman and sped away with the other robber, while the other one, who was attacked by the victim's brother ran into the bush, amidst firing of warning shots.

DCOP Timbillah said around 8:30 pm the same night, the robbers after abandoning the taxi cab and cruising with the Nissan Pathfinder, robbed another victim at Asokwa, in front of his residence, of an amount of GH¢95,000 and two Laptops, two mobile phones and suitcase containing personal belongings of the victim who had just returned from Accra, and had gone to withdraw the cash from the Ghana Commercial Bank.

The robbers, after raiding their victim, ran away with the booty and abandoned the Nissan Pathfinder in a nearby bush at Buokrom with the ignition on.

The Ashanti Regional Police Boss, however, said around 9:30pm the police had a distress call from Apromase, near Santasi, that some armed robbers were attacking some residents there, and in swift response to the call, the Police Buffalo team quickly moved to the scene and engaged the robbers in a shoot out, leading to the death of four of them while the two other accomplices managed to run away.

The victim, who was treated and discharged at the Komfo Anokye Teaching Hospital, together with his brother later identified two of the murdered robbers as those who attacked them earlier that night.

The Police upon investigation later found out that one of the deceased, by name Abdul Rashid Ibrahim, was standing trial for robbery charge and had been granted bail on September 21, 2006, at High Court Seven, but had since failed to re-appear before the court.

Another deceased, who was identified as Rashid, was said to have been a close associate of one of the most notorious armed robbers, Ousman Gado, who was killed on August 3, this year, in a shoot out with the police, while another was identified only as Fiifi. According to the Police Commander, the police have embarked on a manhunt for the two other suspects.

In a related development, the Ashanti Police MTTU has arrested a 26-year-old man, Yaw Armah, who paraded himself as a policeman and extorted money from unsuspecting drivers at the Kejetia Lorry terminal. Yaw Armah a native of Achiase, near Barekese in the Atwima Nwabiagya district, who was confidently dressed in police attire, was spotted last Friday afternoon busily collecting money from commercial drivers operating at the Kejetia terminal.

Personnel of the MTTU, who became suspicious of his identity, subjected him to interrogations and in the process, the 'police officer' decided to run away but was arrested by by-standers.

Unspecified GH¢5.00 and GH ¢1.00 notes were found on Yaw Armah, who is currently in police custody assisting with investigations.