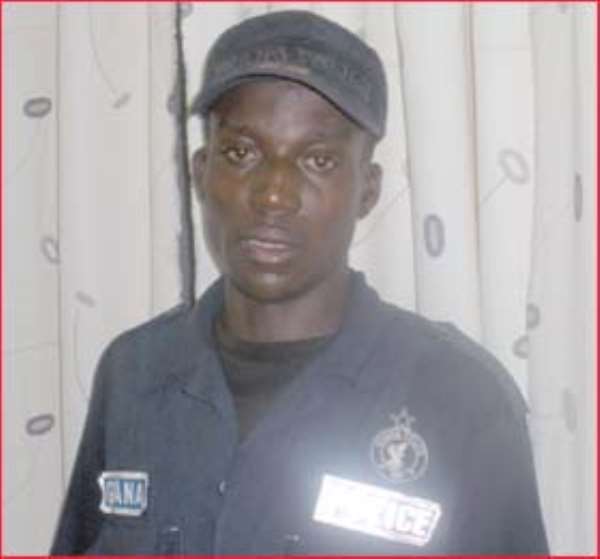 A 26 YEAR-OLD man, who posed as a police officer belonging to the MTTU Division to extort monies from unsuspected drivers around Kejetia Bus Terminal in Kumasi, is in the grips of the law.

, an electrician by profession, was grabbed dressed in police outfit and posed as an MTTU personnel, extorting monies from 'Trotro' drivers on Saturday afternoon.

Briefing the press, DCOP Patrick Timbillah, the Ashanti Regional Police Commander, said his outfit received information some time ago about a fake police officer who was soliciting monies from drivers at Kejetia.

The police, he said, upon receiving the shameful and disheartening news, put the suspect on surveillance and fortunately, the police spotted Amoah dressed in police attire and extorting monies from drivers on Saturday.

Some police officers approached Amoah and questioned him about his identity but the suspect, who was not able to come forth with any tangible answers, started to shake.

Sensing danger and knowing that he was on the brink of being arrested, Amoah took to his heels but he was soon grabbed by onlookers and brought to the police station for questioning.

Wrapped dried leaves, suspected to be Indian hemp, and crumpled 5 and 1 Ghana Cedi notes were found in Amoah's pocket when the police conducted a search on him.

The suspect is now in police custody assisting in investigations and would be arraigned immediately police concludes their investigations, DCOP Timbillah stated.