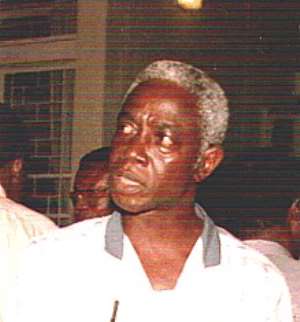 The Electoral Commission (EC) says the technical lapses associated with Tuesday’s local government elections were due to the complexity and multiplicity of the electoral areas. The elections have been described as a flop and the EC has been condemned for failing to tap its rich experiences in previous elections to make yesterday’s a success. But the Chairman of the Commission, Dr. Kwadwo Afari-Gyan told the Ghana News Agency that "the organisational complexity of local government elections is much greater than the Presidential and Parliamentary elections, hence the unexpected technical hitch leading to the last minute postponement in some districts." Dr. Afari-Gyan explained that the difficulties were compounded with late submissions of photographs of candidates for the Unit Committee elections, which delayed the printing of ballot papers. Besides the late submission, some candidates either submitted oversized or old photographs. He said the complexity and multiplicity emanated from the nature of elections. "As the whole country is considered as one electoral area and 200 constituencies in a presidential and parliamentary elections respectively, the local government deals with 5000 electoral areas and 16,000 Unit Committees." Dr Afari-Gyan also noted that the number of candidates involved were astronomically higher than that of the general elections, stressing that the electoral areas dealt with between two and ten while the Units were confronted with between eleven and thirty-three. On the postponement of the elections from July to August, Dr Afari Djan attributed it to cumbersome preparations for the unit committee elections. The postponement, therefore, was to reduce the cost of holding two elections on separate days. Dr Afari-Gyan stated that record shows that turnout for local government elections had not been very impressive as compared to presidential and parliamentary elections. The voter turnout in the 1978 district council elections was 8.4 per cent, 1994 recorded 29.3 per cent, and 1998 was 41 per cent. "The question that we should all be addressing, is why the apathy towards local government elections," Dr Afari-Gyan stressed. He said even though statistics for the current elections were not available the apparent low turnout could also be attributed to the fact that for the Unit Committee levels, there were elections at only 5,619 units, which recorded over 10 contestants each out of the 15,386 units minus the 31 districts where elections had been postponed. He explained that there were no elections in 9,767 units as they recorded below the required number of candidates for the elections. The EC Chairman, therefore called for assessment of the Unit Committee concept, to find out why people were simply not interested to contest for elections. "There is also the need to assess whether we need over 15,000 Unit Committees."