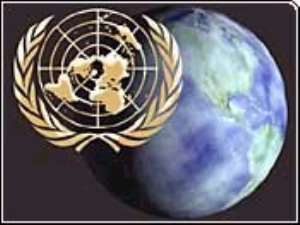 ...Global lottery to fund U.N.? HELSINKI - A global lottory plan, originally proposed by Ghana in 1972, but failed to win sufficient backing could become reality soon. The plan, which will help fill U.N. coffers, have taken a step forward and could become reality within 18 months, according to a former Finnish leader promoting the idea. Martti Ahtisaari, a former president and U.N. peace broker, said on Saturday the United Nations had recently agreed a cooperation project with the World Lottery Association (WLA), and if it got the go-ahead, it could be running by late 2003. "We will know at the end of the year how lottery support can be put into practice," he told STT news agency in an interview. Ahtisaari proposed the idea to the WLA, which has 140 member organisations around the world, over a year ago and Finnish President Tarja Halonen spread the idea in March in a speech to a U.N. development summit in Monterrey, Mexico. She said a world lottery could help fight on poverty by supplementing official development aid. A feasibility study would be ready later this year.
Ahtisaari gave no details about how it would be operated.

2020 Polls: Kwaku Bonsam Fires Up For Victory In Offinso Nor...
10 minutes ago