Ghanair Defrauded Of Over ¢600 Million 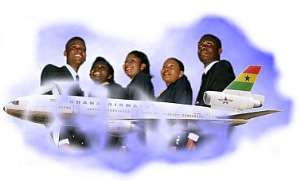 A Forex Bureau operator, Alhaji Omar Adams, has defrauded the cash- strapped national carrier, Ghana Airways, to the tune of $83,185 (¢655.4 million). Alhaji Adams, who owned the now shut-down Chase Forex Bureau at Ringway Estates, Osu in Accra, connived with Isaac Lawson, a cashier at the Ghana Airways Head Office at the Airport Residential Area and one Asafo-Adjei of Antrak Travels agency to defraud the airline through the manipulation of financial instruments for cash. According to the Serious Fraud Office (SFO) which investigated the matter, the Ghana Airways Cashier, acting with the other gangs, dubiously exchanged some of the daily income from sales of tickets in dollars for negotiable instruments like travelers cheques, international money orders and personal cheques drawn from accounts of banks abroad. ‘These financial negotiable instruments were either brought to him in dollar cash exchange by Asafo-Adjei of Antrak Travels or Alhaji Omar Adams of Chase forex Bureau in Accra,” the SFO stated in its annual report for 2001. Upon the financial instrument, Alhaji Adams then paid 10% commission to be shared by Lawson and Asafo-Adjei. The bubbles however burst when the Ghana Airways cashier subsequently paid the financial instruments into the bank account of the airline at merchant Bank Limited, Accra for clearing. “All the negotiable instruments thus exchanged by Lawson with cash were returned unpaid by the originating financial institutions abroad because they were unacceptable for various reasons”, the SFO said. Alarm on the fraudulent deal was blown by Ghana Airways officials when they started noticing alarming rejection of financial instruments from Alhaji Adams. Thinking that Alhaji Adams was a travel agent, the Airline’s initial move was to stop him from selling the company’s air tickets. But upon internal investigation, it came to light that Lawson had compromised on his job. He was summarily dismissed and the case referred to the SFO. The Statesman newspaper reports that it was not the first time such a case has been referred to the SFO for thorough investigation. Lawson, the SFO explained, had no authority whatsoever as an employee of Ghana Airways Limited to accept these negotiable instruments and pay cash equivalent for them.