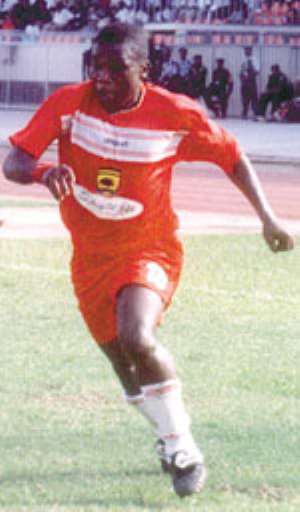 Nana Arhin Duah, the ace striker of Kumasi Asante Kotoko has said that his side’s loss to Accra Hearts of Oak last Sunday would adversely affect his performance in Kotoko's subsequent games in the league.

The prolific striker, who could not feature in the titanic encounter due to an injury he sustained while the reds play in the just-ended four-club "Vodacom Cup" tourney in South Africa, told the GNA Sports that the defeat has dealt him a big blow and dampened his spirit. "It is simply unimaginable that we have to lose in such a massive way. It's such a big pain and very difficult to come to terms with," he added.

On whether his side loss could be attributed to his absence in the team, he declined to admit that it could have been a factor saying "I do not want to take any thing away from my colleagues who equally have the ability to glitter just like me; we only lost to a better side."

When asked if his side, might have lost the match out of weary from the Vodacom tourney, the player said their participation in South Africa had nothing to do with the defeat but said " the Phobians played a determined game, took their chances and carried the day deservingly."

When asked on whether he was still hopeful that his side could still win the league, as any typical Ghanaian football fan, the player did a number of calculations to indicate that should Hearts drop some vital points whiles Kotoko win all their matches Kotoko could win the ultimate adding that anything can happen in football.

"Kotoko is not the only club that can beat Hearts. The Phobians can lose at a point to other clubs whiles we win." He insisted that Kotoko is the best club in the country and would therefore do whatever possible to salvage its image.