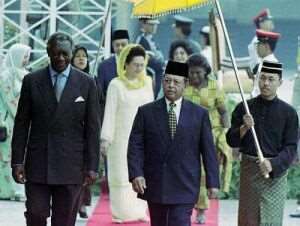 MALAYSIAN businessmen should seriously consider Ghana as the gateway into the Economic Community of West African States (ECOWAS) region, which offers huge potential market with a population of 250 million. Visiting Ghanaian president John Agyekum Kufuor said: “Ghana is well positioned to serve as the gateway for this almost virgin West African sub-region market.” He said the European Union was also accessible to Ghana as a result of the country’s accession to the Fourth Lome Convention and recently granted visa concessions by the United States under the African Growth and Opportunities Act, which allows goods produced in Ghana to be exported to the US with minimum restrictions or tariffs. “Malaysian businessmen are invited to take advantage of these incentives to either relocate or establish subsidiaries of their respective manufacturing and industrial companies in Ghana within its export processing zone,” he said. Kufuor said this in his keynote address at a business luncheon hosted by the National Chamber of Commerce and Industry of Malaysia (NCCIM) in Kuala Lumpur yesterday. He said the Ghanaian government was encouraging more manufacturing-related activities, namely textiles and garments, computers, electrical goods, jewellery as well as furniture components using Ghanaian and other West African wood. Kufuor said that land in Ghana was also available for large-scale cultivation of oil palm, cocoa and cotton, noting that feasibility studies had shown that climatic and soil conditions for cultivating these crops in Ghana were similar to Malaysia. According to Kufuor, Malaysian business interests in Ghana started only in 1995. “Of the 18 Malaysian (ap- proved) investments in Ghana, only seven are in operation,” he said. He believes the 11 other projects were either put on hold or abandoned due to the 1997 financial crisis affecting the Asian countries, including Malaysia. “With the financial crisis behind us, I am confident owners of these projects will revive them and under the healthy and secure business environment created by the current Ghanaian government,” Kufuor said. On Ghana’s economic performance, he said that the country had registered a successful economic recovery through stimulating productivity, increasing both foreign and local private investments and ensuring prudent and effective harnessing of public resources. He stressed that major priorities had been in the restoration and maintenance of fiscal and monetary disciplines and the control of inflation. “We have succeeded in bringing down inflation from nearly 42% last year to less than 15% this year,” Kufuor said “We expect this positive trend to continue until a single digit inflation is achieved by the end of the year.” Bank interest rates have been pulled down by the diminishing inflation rates from 52% to the current 26%. “Our currency, which had depreciated by about 95% in 2000, has achieved a measure of stability and depreciated by about 5% in the past year,” Kufuor said