Conspiracy to abuse the rights of criminal defendants 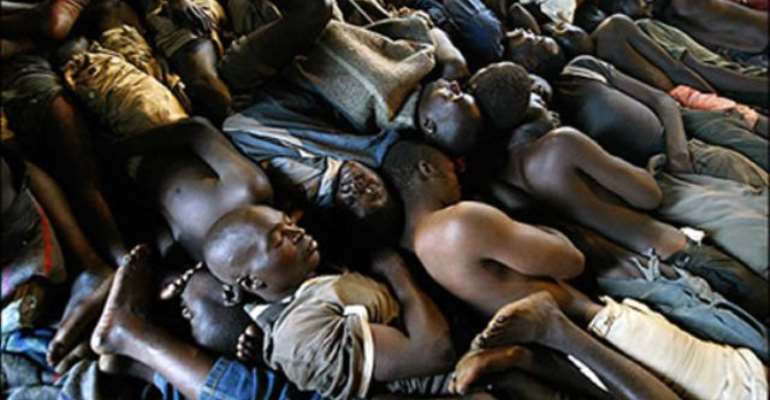 The prison situation in Ghana is similar to this!

The Ghana Prisons records show that as of July 2009, the Nsawam Medium Security Prisons had exceeded its maximum capacity of 851 inmates by over 200 per cent to 2,951 inmates.

Remand prisoners are criminal defendants who are held in prison custody pending the final adjudication of their cases. The courts normally commit them to prison custody on warrants that are renewed periodically (after every three months in Ghana) in order for their continuous imprisonment to be lawful.

In Ghana, they are usually “dumped” in prison because those prosecuting them have asked the courts to do so while investigations “continue.” The courts are mostly more than willing to grant the desires of the prosecutors, some of who subsequently go on vacation and everybody forgets about the unfortunate prisoners for several years.

Many of them are held for petty crimes and could not have been sentenced for more than two years if convicted. Yet, some of them have been held for nearly 20 years.

The remand prisoner problem has become so pronounced in Ghana recently to engage the attention of government, the judiciary, human rights activists, United Nations Agencies, non-governmental organisations in the rule of law sector, and the media.

For the last two years the remand prisoner problem and possible strategies to resolve it have been discussed at various forums, including the media.

I was privileged to have attended one of such forums in Akosombo recently, where Her Ladyship the Chief Justice, the Attorney-General, the Minister for Interior, the IGP, the Prisons Boss, the acting Commissioner of CHRAJ, and many others of the criminal justice system had gathered for two days to brainstorm on how to save the situation. The dialogue was under the auspices of the Attorney-General's Office and sponsored by the UNDP.

It was clear from the conference and subsequent pronouncements of the stakeholders that the leadership of institutions of the criminal justice system is seriously concerned about the problem.

It has also been clear from certain actions by the Judiciary and the A-G's office that the determination to reduce the intensity of the problem is not lacking.

However, it appears that the main focus was misdirected because we have all accepted certain arrangements in the criminal justice system as matters we can do little or nothing about and we are not willing to make the right suggestions to the government and judiciary and tackle the issue headlong.

I talked about this at a dialogue in Akosombo and I believe much attention was not paid to it.

The main problem is easy to spot. It is not the practice in the A-G's Office or problems associated with police prosecutions and attitude of police investigators. The problem is the non-availability of defense counsel for indigent criminal defendants.

Accordingly, unless these unfortunate citizens who are constantly “dumped” in the prisons for the least offence are given adequate and effective legal representation, the remand prisoner problem shall not go away.

There may be several makeshift measures to resolve the problem. But while they are discussed, new remand prisoners are added daily to the stock. It is defense lawyers that would argue aggressively in court that a particular defendant deserves to be granted bail.

It is defence counsel that will make a motion to the court that the prosecution has kept a defendant in prison for too long without cause, and thereby force the State to enter nolle prosequi for the defendant.

Unfortunately, almost all the remand prisoners in Ghana are indigents who could not afford to hire their own lawyers.

Consequently, for most of them, the only court proceeding they have attended, which was the day they were committed to prison, they did not have anyone representing their interests and they were unfairly taken through a one-sided proceeding that led to their remand in prison custody.

The solution is simple but will require the will and resolve of the government and the judiciary to make the necessary investment to accord all Ghanaians equal justice and equal protection of the law.

Let us remember that part of Article 7 of the United Nations Universal Declaration of Human Rights provides that “All are equal before the law and are entitled without discrimination to equal protection of the law.”

Equal protection of the law and equal justice to all means that no person must receive less justice than others because of his sex, colour, language, religion, race, ethnicity, and financial status. This is the basic principle underlying the Universal Declaration of Human Rights.

In some jurisdictions, governments have created Public Defender Offices, which are equipped with criminal defense lawyers to represent indigent criminal defendants because they believe as a U.S.

Supreme Court Judge, Justice Hugo Black once remarked in a popular case that “There can be no equal justice where the kind of trial a man gets depends on the amount of money he has.”

In such jurisdictions, when a suspect is arrested, he would be advised of his rights to remain silent and a counsel of his choice if he is able to hire one, or the government will provide him with counsel if he is unable to hire one.

Once the suspect opts to remain silent and to have a lawyer, he will not be questioned anymore until he is provided with a lawyer. The suspect may subsequently not utter a word throughout his trial.

In Ghana, however, when a suspect is arrested, he may be given some kind of advice that he has the right to remain silent. Yet, the police may give him a couple of dirty slaps to force him to “confess.”

The suspect will then be asked to write a statement, which is subsequently used against him in court.

In most cases, the police would write the statement for the suspect and ask him to sign it.

Thereafter, the suspect is taken to court without a lawyer representing him and police prosecutors would tender the suspect's supposed "confession” upon which a demand is invariably made for the suspect to be sent to be remanded while investigations are “ongoing.” Clearly, justice is being rationed by the criminal justice system in Ghana.

All of this is happening in Ghana although Article 19(2) (e) of the 1992 Constitution provides that everyone charged with a criminal offence shall “be given adequate . . . facilities for the preparation of his defence.” Ghana's equivalence of the Public Defender is the Legal Aid Scheme, established under the Legal Aid Scheme Act, 1997 (Act 542).

Unfortunately, the scheme is unable to achieve the goal intended because it does not have its own lawyers to take up cases on behalf of indigent Ghanaians.

A careful scrutiny of the Act that established the scheme reveals that the scheme was set up to depend on lawyers who would be doing national service and private GBA lawyers who are willing to provide pro-bono services.

But by the process of training lawyers in Ghana, a person would have long discharged his national service obligations before becoming a lawyer.

Also, although it is a social responsibility for lawyers to render pro-bono services, it appears that in Ghana lawyers are not enthused to do pro-bono legal work and give back to society. In any case, a government that is willing to uphold the principles of the Universal Declaration of Human Rights must not depend on the willingness of private lawyers to provide free services to indigent citizens.

Such a government must make its own direct investment to ensure that every criminal defendant who desires a lawyer but is unable to hire one is provided with one before he is taken through any judicial proceeding.

Until we face this reality and make the right recommendations to government, and until the authorities make the necessary investments, taking into account that justice must not be rationed to favour the rich, until we stop misdiagnosing the issues, the remand prisoner problem shall not go away and it would seem that all of us are in a conspiracy to abuse the rights of indigent criminal defendants in Ghana.